Home > How To > How to Teach Yourself to Code 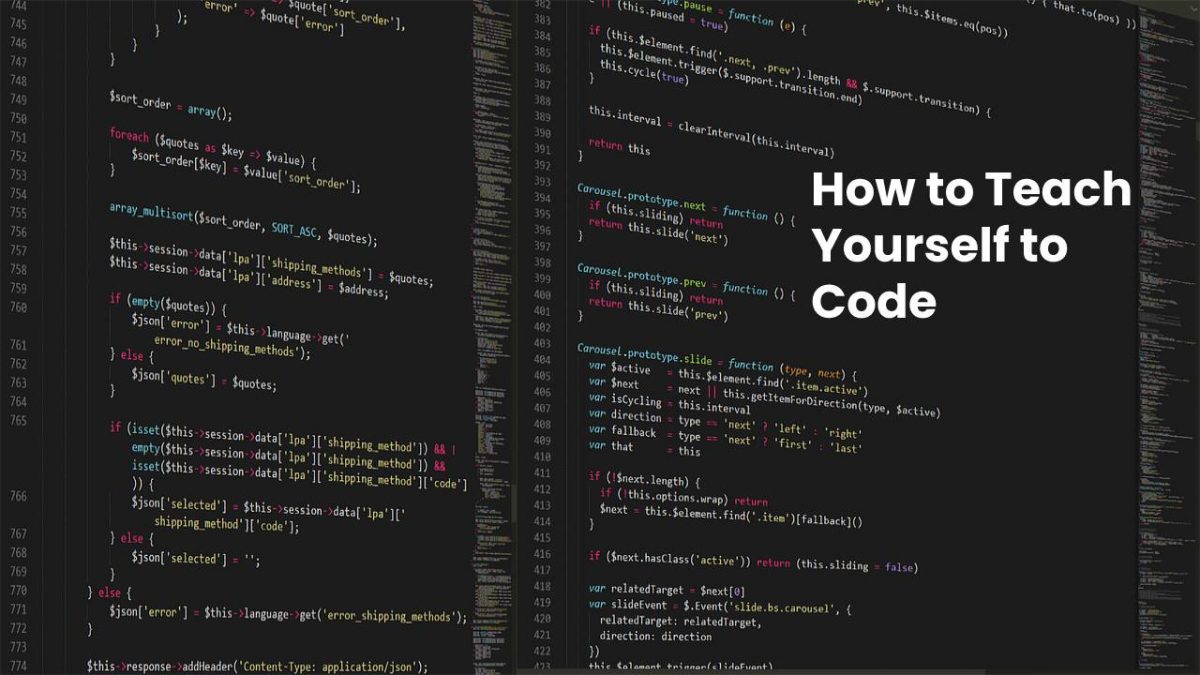 How to Teach Yourself to Code

So, you’ve decided to learn how to code. What a fantastic idea! It’s a skill that’s becoming increasingly important in today’s world. There’s no denying that digital technology has become entwined with our lives, and learning how to code helps you gain a better understanding of what’s going on behind the scenes and how it all works.

It also provides you with more work opportunities. Coding seems to be one of the most important skills to have in the future. Learning to code in a language like Perl can get you a starting salary of more than $80,000 per year. There are software engineers making six-figure salaries after only a few years of experience.

But maybe you’re already out of school. You have a degree in a different field, and you don’t have the time or the money to go back and pursue a four-year computer science degree. However, you’ve noticed that there are a zillion online tutorials on coding and wondered if it’s something you could learn by yourself.

Yes, coding is something that you can teach yourself, and there are tons of people who have done it. And not just people like Bill Gates or Jack Dorsey. Regular people from completely unrelated fields have managed to use online resources to teach themselves how to code.

We’re not saying it’s easy. Taking your first steps into the vast universe of computer science will seem daunting, and there’s no magic formula to help you go from absolute beginner to code wizard in a few short months, no matter what bootcamps advertise. It’s a process. You will try, fail, adjust and try again. Along the way, you will learn how to learn. You will learn what works for you and even what you’re supposed to learn. In the beginning, you’ll feel like you need to learn everything because everything is interconnected. So, before you take the leap, here are our tips.

What Programming Language Should I Start With?

Most beginners get caught up in figuring out which is the best language to start with. They shouldn’t. Your main goal should be to familiarize yourself with the basic concepts of coding. These are similar no matter what language you use.

If you try to find out the answer to this question simply by googling, you’ll find endless disputes between programmers, which are usually very subjective.

Different languages serve different purposes. For example, HTML and CSS are easy to learn, but you can only create basic websites with them. If you want something more interactive, you’ll need to use JavaScript, PHP, or Python. If you want to work with databases, then you’ll need SQL. For mobile apps, you’ll need Java or Kotlin and Swift or C for iOS.

Most programmers recommend starting with Python, JavaScript, C#, or Ruby since they’re fairly easy to learn and offer the most versatility. Most programmers also know at least five different languages. That might sound intimidating now, but you’ll see that once you learn your first language, you can learn a second or a third one much faster because they work in similar ways. Just pick one and get started. You can even try several and see which one suits you best. This is the stage where it’s easiest to get discouraged and give up, so if you’re struggling with one, simply change to something else. You’ll learn the basic concepts, so the second one will seem a lot more straightforward.

If you’re learning how to code because you want to change careers, you can also look for job listings in your area and see which languages are in demand.

Take a Look at Some Online Courses

You also shouldn’t get bogged down by trying to pick the perfect course to get started. You’ll find thousands of them. You can start by searching for lists of the best ones for your language or an introduction to computer science course. You can also look for courses on YouTube and sort them out by the number of views.

Then there are platforms with courses you can buy or watch for free but pay for the certification – Udemy, Udacity, Treehouse, Coursera, etc. Even computer science students use these courses to learn specific skills or get a better grasp of some subjects in preparation for their exams. If you’re located in a country with strict internet censorship, we recommend you use a VPN so you can get access to more resources.

The most important thing is to put everything you learn into practice. It’s possible to understand something like if statements or for loops and not know how to apply them. That’s why you need to practice right from the get-go. Luckily, simple, beginner-friendly coding problems are easy to come by.

As you’re solving coding problems for beginners, you will inevitably run into error messages which is a great opportunity to learn the most important skills for software developers: looking for solutions online!

Why is this the most important skill? Because the computer will generally do whatever you tell it to do. The catch is that you need to be very precise. Painfully precise. If not, it will not understand your instructions and will keep giving you error messages with absolutely no concern for your feelings.

Most people think that programmers are always typing away at their keyboards. That’s what you see in movies – some hacker sitting in front of several screens, pouring out code at an impressive speed.

But in reality, it looks more like this: You write a few lines of code that are supposed to do something basic. You test it, and… guess what? It doesn’t work. So what do you do? You try to separate sub-parts of your code to see where you might have done something wrong. If that doesn’t work, you google it.

Luckily, when you’re a beginner, you tend to make the same mistakes that thousands have made before you, so you shouldn’t have a hard time finding a solution online. Copy and paste the error message – but don’t forget to put it between quotation marks – and it will probably take you to the explanation and solution to your problem.

Don’t get discouraged if you find out the error comes from something obvious. That’s how it usually is. Learning how to code has a way of making you feel unintelligent, but everyone struggles, and it doesn’t reflect on how good you’ll be as a programmer later on.

Review How to Teach Yourself to Code. Cancel reply

How to choose Best Casing for Gaming PC

How To Create An App Without Coding?

How to Connect Robot Vacuum to Smartphone

Shazam Khan, 10 months ago
How To

How To Increase Your Company’s Revenue

How Does An Air Track Work?