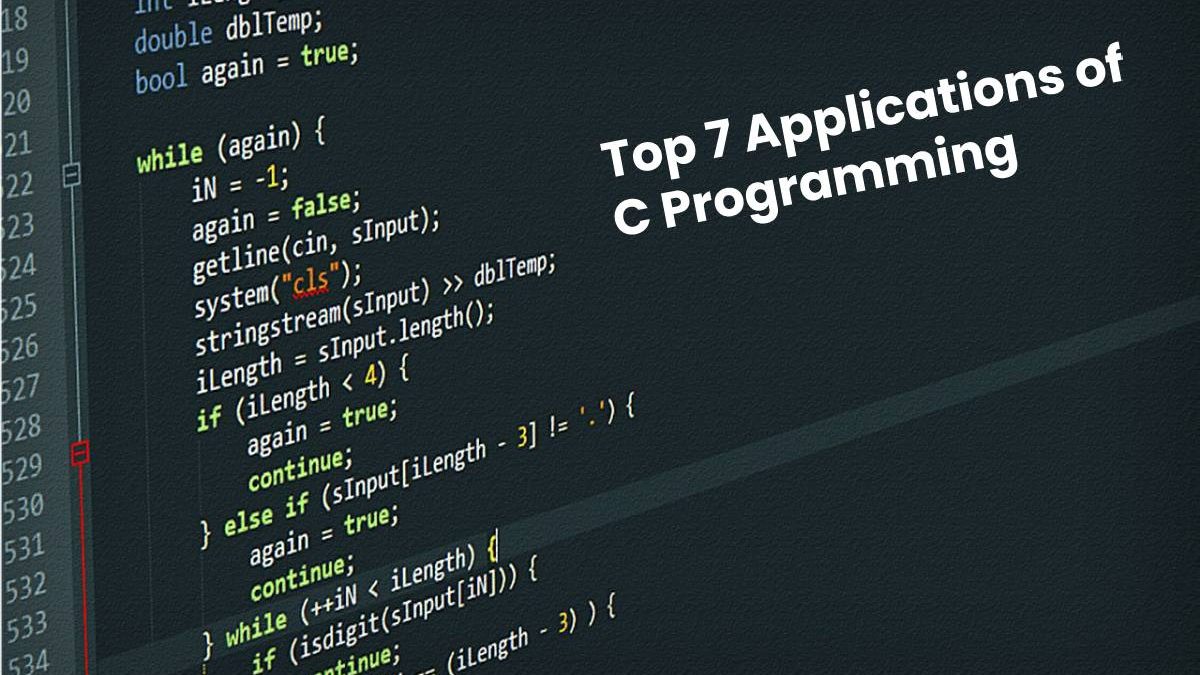 C can be classified as a general-purpose, middle-level, programming language, and finds use in applications across multiple domains. As a programmer, C is the mother language of programming and often taught in college as an introductory language. Besides, it’s faster to write and has a rich library and, importantly, easy to learn.

C is the most widely used language for scripting. For instance, Linux is entirely written in C. Yes, C language is a better fit for developing desktop applications and system software. Nevertheless, the system being designed should ideally require fast and direct access to hardware, or the same has limited memory. Below are some applications of C-programming:

Several compilers make use of the C language. A compiler basically translates any high-end programming language to a machine (low level) understandable language. C and C++ are used in Apple C++, Clang C++, Bloodshed Dev-C++, and even MINGW. Also, when developing a new language, C language always has a role to play.

A machine language consists of numbers and makes it impossible for any human to read. What an assembler does is transform the same to words that humans can understand. Programmers still use assemblers because it’s faster, then later adopt a C programming language when developing a computer program.

A host of text editors is designed with the help of C programming. C enables an editor to do various tasks, including task manipulation, and be able to have a command system for things like copy and paste. Ideally, a text editor written in C is meant for advance programming, and a beginner would not be at ease using the same. Simple text editors like Notepad use an advanced version of C, which is C++.

When you want to print a document and send it from the computer to the printer, there’s a likelihood that the software enabling the same to happen is written In C. Generally, when multiple print requests are sent to a printer, the print spooler allows storing within a print queue or a buffer where it’s retrieved by the printer or print server. All this is enabled thanks to C programming.

C language is good at implementing data structure with any algorithm designed. Therefore, it can facilitate faster computation in programs. Consequently, applications like MATLAB and Mathematica have utilized C programming. Besides, the language itself implements basic mathematics.

C programming allows for procedural programming and greater access and control to hardware, making it ideal for gaming applications as well as Graphic user-based applications. Examples of games written in C language include chess and archery, among others.

There are several other uses of C language from Utilities, enterprise software, language interpreters, and even databases. The list is endless, considering that C language use cuts across all domains. What makes C programming still stand out after all this year since it was developed way back in 1972 is its library.

The languages provide low-level access to memory, a simple set of keywords, and a clean style that any programmer would love. In fact, many other programming languages have directly borrowed from C, including C++, C#, Unix’s C shell, LPC, Objective-C, Perl, Java, JavaScript, Limbo, PHP, Python, Rust, D, Go, Swift, Verilog, and SystemVerilog among others.

What is Cyber Crime? - Definition, Functions, Types and More

What is Insider Threat? - Definition, Protection Against them and More