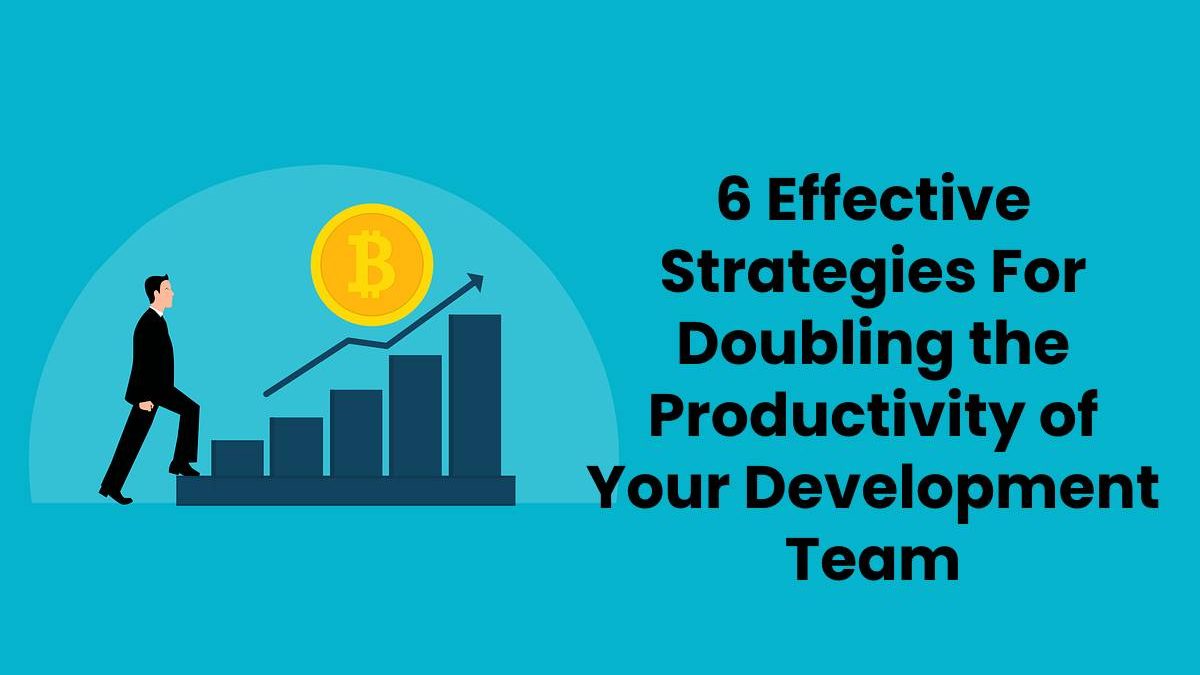 6 Effective Strategies For Doubling the Productivity of Your Development Team

6 Strategies For Doubling the Productivity of Your Development Team

Developers can often self-isolate and wrestle with lines of code for hours on end to no avail.

It’s a frustrating profession at times, and can be equally frustrating if you’re tasked with motivating such developers.

What do you say to someone who is starting to see the numbers and characters on the page as a matrix-like wall of lines and dots?

You may think it’s easier to let your developers resolve issues themselves, as they’re the ones with the technical know-how, but there are some tricks to increase productivity of your development team that we’ll let you in on in this guide.

With these tips and tricks, you should be able to get the most out of your developers, even if it seems like they’re running on fumes at times. Word of warning, though, it’s best to implement these strategies at the beginning of the work day, before your developers get stuck into their work and fill their heads with complicated coding problems.

For many developers, it’s all too tempting to jump straight in and get stuck into the problem in front of them. After all, isn’t programming all about getting up close and personal with the issues and solving them through a relentless trial-and-error process?

It certainly can be, but it doesn’t need to be that way.

What if you could reduce the amount of potential bug fixes for your developers ahead of time? Wouldn’t that save them a lot of time and effort, and needless frustration?

While it might not seem revolutionary, the strategy we’d recommend is to have your developers map out outlines, flows, and schemes that could help them overcome any issues they encounter when it’s time to get coding.

You can invest in a concept mapping tool so that they can plan out their approach before they get stuck in. This way, they can think clearly and identify potential problems and think of solutions before they’re fully immersed in the project.

Now you may be wondering, how on earth can you double productivity by promoting downtime?

It seems counterintuitive, but hear us out.

Burnout is often par for the course for many developers, given the nature of coding. As such, there are going to be several moments throughout the workday when they find themselves staring blankly at the screen in front of them unable to do anything productive.

It’s in these moments that you should encourage your developers to take a minute to themselves. Whether they need to get up and stretch their legs or go outside for a moment and feel the cool breeze on their face, this momentary escape from the labor-intensive coding can help reset their minds so they can hit the ground running again.

While it’s true that developers experience burnout from time to time, and you should allow them some time to recover, you don’t want your workforce to take advantage of this and start procrastinating.

Burnout combined with procrastination is a recipe for low work output, and can have a direct effect on your team’s effectiveness.

So what can you do to discourage procrastination?

Employee monitoring tools allow you to keep tabs on your employees at a glance, so you can see exactly what they’re spending their time on throughout the workday. This lets you know when they experience productivity slumps, and whether or not they’re engaging in non-work-related activities when they shouldn’t be.

Even just having software like this installed can dissuade developers from procrastinating, especially with the regular screenshot feature which can catch them in the act.

While this might sound like another counterintuitive tip for boosting productivity, playing games can do wonders for worker output.

More specifically, we’re referring to the process of having your developers gamify tasks.

What do we mean by this?

Well given the nature of programming, it lends itself way to the world of gaming and so thinking of the coding tasks as levels of a game can be quite motivating for some developers. You could even go a step further and have a leaderboard in which you have developers compete with one another each day in order to win bragging rights.

5. Get to Grips with the Tools

In order for developers to put out their best work, and do some efficiently, they need access to the right tools and libraries.

There are dozens of productivity tools for programmers out there, such as time clock software, as well as traditional methods such as the pomodoro timer and to-do list apps.

While it might not seem like a tool or two could help your developers reach the next level of productivity, what’s the harm in trying?

Whereas some developers may thrive when they gamify their coding tasks, others might work best using a simple to-do list to systematically tick off tasks and get a dopamine hit every time they do.

As we’ve already discussed, many developers prefer to go rogue and work through problems themselves.

This might work for most of the time, but what about those moments when a developer doubts their next move or can’t quite wrap their head around the problem in front of them?

This is where you can come in, and help boost your team’s productivity.

If you learn the strengths and weaknesses of your developers, you can pair them up in a way in which one partner’s strengths are the other’s weaknesses.

This way, if one developer is ever struggling, they can tag in their partner for an assist which can speed up the process.

Getting the most out of a developer team isn’t an easy task, but if there are several interesting strategies you can try to boost overall productivity.

Have your developers think of their coding tasks as a game, provide them with an assortment of productivity tools, and pair them up to see if you can improve their overall work output.

Review 6 Effective Strategies For Doubling the Productivity of Your Development Team. Cancel reply

How to Make Your Business Name Timeless

How to Write a Job Description for an Application Developer

The Best Online Fax Service for 2020

5 Tips For A Successful Startup Or Small Business In 2021

What Does an IT Consulting in Washington DC Company Have to Do in Order to Stay Ahead of The Competition?