Home > How To > How to Configure the Camel Kafka Connector for Integration? 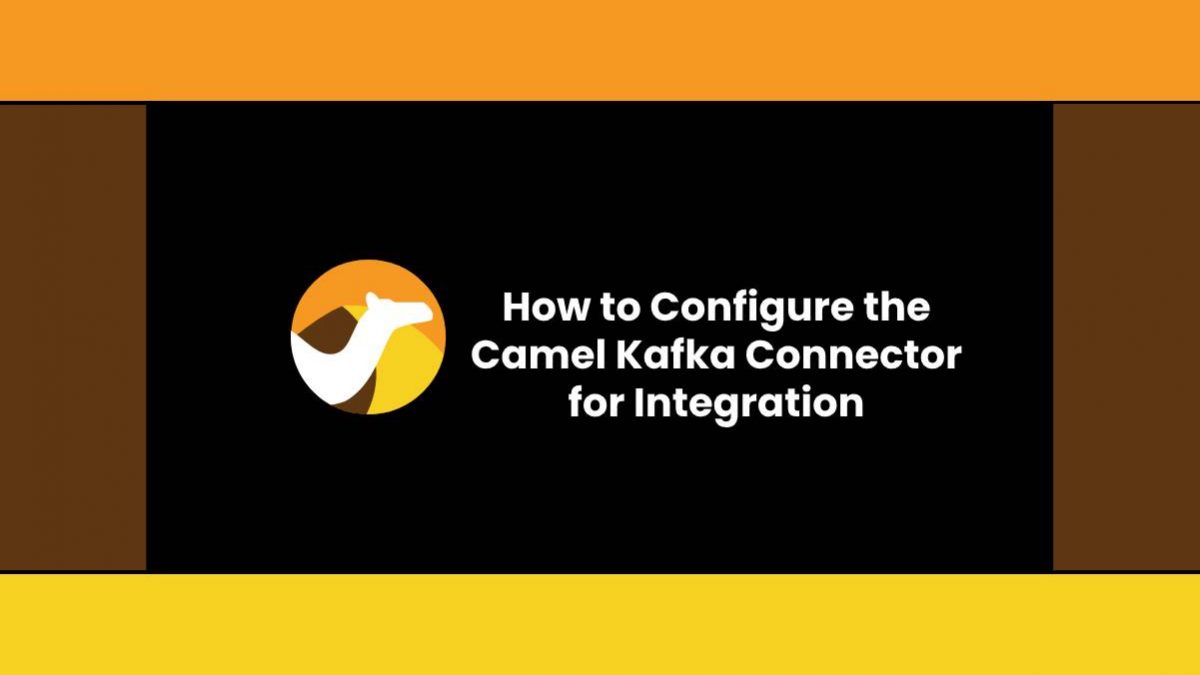 Connecting Kafka to a third-party or external application is a time-consuming operation that necessitates creating multiple lines of code to automate data transfer processes. To avoid these issues, you can utilise the Apache Camel Kafka connector, which connects the Kafka environment to your desired external application for message production and consumption.

In this article, we will learn about Kafka, Apache Camel Kafka Connector, how to configure Camel Kafka and when and when not to use it.

Apache Kafka- Apache Kafka is an Open-Source Distributed Event Streaming platform that was created in 2010 by LinkedIn and is used to create recommendation systems and event-driven applications. Kafka has three key components: Kafka Producers, Kafka Servers, and Kafka Consumers. Producers and consumers of Kafka can send and receive real-time messages through Kafka servers.

Apache Camel – Apache Camel is a free and open-source integration framework that makes building integration systems simple and easy. It also enables end-users to integrate several systems using the same API, which supports a variety of protocols and data types while also being expandable and allowing the addition of custom protocols.

What is Apache Camel Kafka Connector?

The Apache Camel Kafka connector is a well-known adapter component of the Apache Camel ecosystem, which is an Open-Source Application Integration platform. You may connect to 300 external sources or third-party programmes like SQL Server and PostgreSQL with Apache Camel Kafka Connector to establish connectivity between Kafka servers and the appropriate applications. Furthermore, the Camel Kafka Connector allows you to easily integrate any applications, protocols, or endpoints into the Kafka environment without the need for any extra automation or the creation of a large amount of code. This enables you to create a painless integration procedure between Kafka and external applications for producing and consuming real-time messages.

One must use the appropriate Camel Kafka connector plugins since Apache Camel allows you to link Kafka with numerous external systems or applications for producing and consuming data. In the procedures, you’ll learn how to use the sink and source connectors to create a basic integration between a SQL database and Kafka.

You must meet specific requirements in order to utilise the connector to implement the integration between a database and Kafka locally, i.e. on your local system. On your local workstation, you should have an active Kafka Server, Zookeeper Instance, and Kafka Connect framework. In addition, before beginning the integration procedure, you must first create Kafka topics.

You successfully downloaded and configured the Camel Kafka connector to establish integration with external apps by following the procedures outlined above. After creating the connection setup, you can use the Camel Kafka sink and source connectors to integrate the Kafka environment with the external applications.

When to use Camel and Kafka together?

To use Camel and Kafka together, two options are available:

Lets understand these options in details

1. Kafka for event streaming and Camel for ETL

Camel and Kafka complement each other effectively. As a bridge between the two environments, Camel’s native Kafka component is the ideal native integration point: 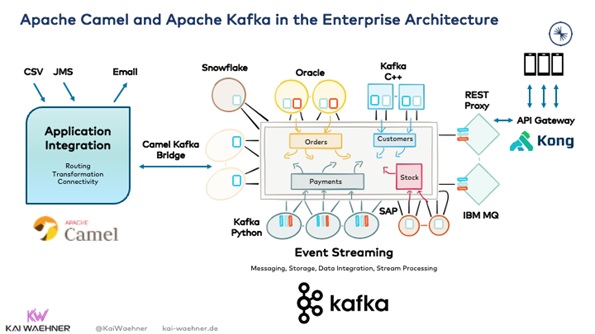 Camel and Kafka are shown living adjacent to each other in the architecture above. Camel is used for application integration in the business domain. Between the Camel integration application and several other applications, Kafka serves as the core nervous system.

Kafka’s advantage as a central integration layer is, its unique collection of traits inside a single infrastructure, which includes:

Another option for combining Kafka and Camel is to use Apache Camel’s “Camel Kafka Connector” sub-project.  Camel’s Kafka component (= connection) is not this feature! Instead, the deployment of camel components into the Kafka Connect architecture is a relatively new project.

The advantage: Can obtain hundreds of new connectors “for free” within the Kafka ecosystem this way.

However, evaluate the total cost of ownership as well as the entire work required to implement this strategy. One of the most difficult problems in computer science is application integration, especially when dealing with transactional data sets that require no loss of data, exactly-once semantics, and also no downtime. The more components you add to an end-to-end data flow, the more difficult it becomes to meet performance and reliability SLAs.

To run the integration natively with solely Kafka code, copy the business logic and API calls out of the Camel component and paste them into a Kafka Connect connector template. This solution provides for a cleaner architecture, end-to-end integration with an unified structure, and much easier testing, debugging, and monitoring.

When NOT to use Camel or Kafka at all?

The simplest method to begin evaluation is to eliminate tools that do not solve the problem.

The following scenarios are NOT supported by Camel or Kafka:

Kafka and Camel both are capable of integrating applications. They do, however, serve quite different purposes. Across business units, geographies, and hybrid clouds, Kafka is the central event-based nervous system. On the other hand If you need to integrate data within an application context or business unit, Camel is the technology to use.

To conclude, you may seamlessly integrate any apps, protocols, or endpoints into the Kafka environment with the Camel Kafka Connector without involving any external automated processes or creating a huge set of code.

Hevo Data, a No-code Data Pipeline, gives you a consistent and dependable solution for managing data transfer between a number of sources, such as Apache Kafka, and a range of Desired Destinations. Hevo Data allows you to export data from your selected data sources and load it using its strong integration with 100+ sources (including 40+ free sources).

Review How to Configure the Camel Kafka Connector for Integration?. Cancel reply

How to add TikTok video effects

How to Convert MOV to WMV on Windows, Mac and Online

How to Choose the Best Physical Therapist in Queens?

How to Use VPN – A Guide for the Technologically Unsavvy

How to Pass ServiceNow Admin Certification without Dumps?