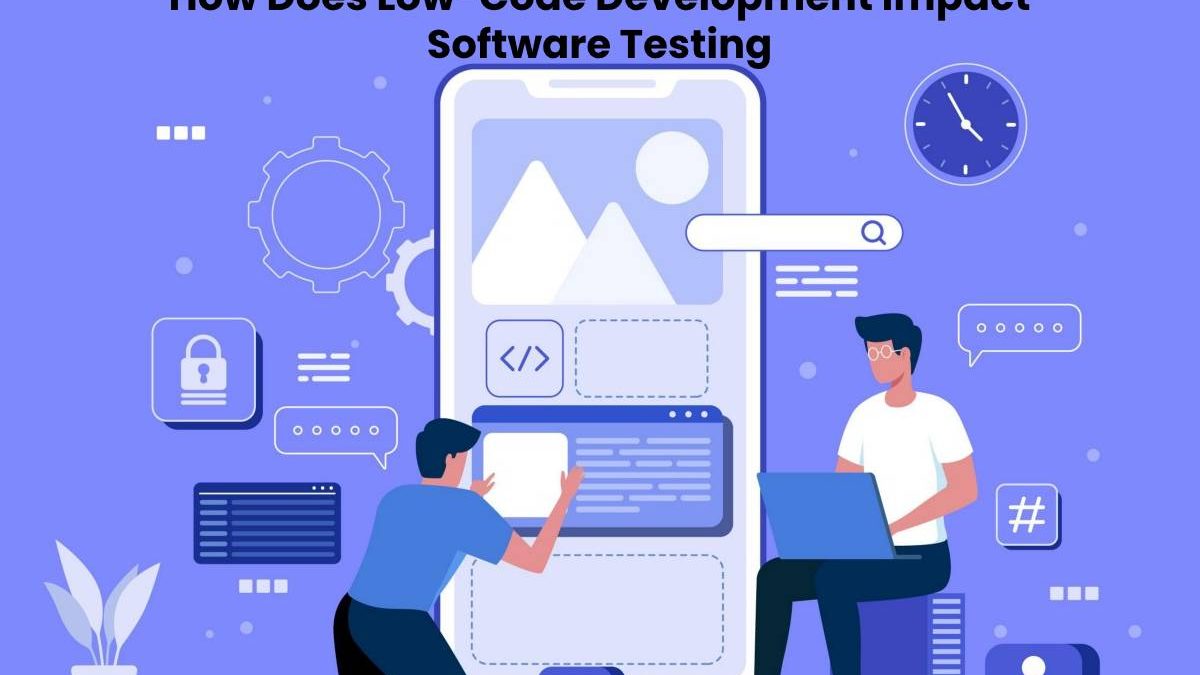 Software testing is one of the most crucial stages in software development, but things have been changing a lot in the past few years, and this is why people are seeking a better and easier option, but what are these, and how could it impact software testing?

But before we dig a bit deeper into the things that are mentioned above, let’s first give a quick look at what is low-code development?

What is Low-Code Development?

Low-Code Development is an approach to completing different development operations, including complete UI, integrations, logic, and data management. Think of this as a process like building a website using the drag and drop option; this includes different aspects, which will be discussed later in the article.

In simple words, low-code development is an approach (visual) in software development that can be used in order to deliver better results to different aspects such as delivery time, optimization, and improving the delivery time. The thing that makes Low-Code development a widespread and growing approach in the current scenario is its easy-to-use graphical approach. In addition to all this, another major factor is its time consumption which is pretty low as compared to what’s already available in the software development ecosystem.

Well, you might have already got an idea of what makes Low-code development a good-to-go option for software testing, but let’s take a deeper dive into what are the different areas that are covered under low-code development.

Economical: One of the primary reasons that make Low-code development a better choice for software testing is its cost efficiency; this can turn out to be a great asset for companies that might not need a large team of developers for creating and running tests. Another major factor that makes low code development a good-to-go option is its accessibility to low-code tools; this, as a result, can help in a number of things that involve the allowance of non-tech users to create and perform tests resulting in saving time and resources.

Faster Delivery: The second major aspect is faster delivery, as the use of low-code tools can help in making testing more efficient and faster. Basically, all this is a result of GUI; the use of a graphical interface can help in several factors, as mentioned earlier. As a result, you can get tests done and adapted faster as compared to traditional testing.

Talking about the delivery, another major factor that makes low-code testing better is the acceleration process; the efficiency involved can help in allowing the product to reach the audience faster.

Collabs: Another crucial factor that is worth mentioning here is the encouragement of collaboration between two important parts of the development process, which include subject matter experts and QA teams. The major reason for this being possible is the graphical user interface, as this can be used in order to mix up the technical and non-tech teams, delivering better teamwork.

Now after getting done with some of the important areas that might be impacted by Low-Code development, its time to get along with the advantages of low-code tests over the traditional framework.

It’s a bit obvious that things have changed quite a bit as compared to what we had a few years ago, but what makes this process better? Well, the traditional automation was made in order to validate the application coding, but things have changed a bit as per the current scenario. The year 2020 introduced some of the low-code solutions, including machine learning, data analytics, and other advanced tech, which resulted in a reduction in test maintenance and test rigidity. If you are looking for some of the best tools, let’s have a summarized edition of what are some of the differences between low code development and traditional development.

Since we are now all done with the comparison between Low Code Development and Traditional development, let’s take a look at some of the best software testing approaches in low-code application development environments.

You might be familiar with the approach of how efficient software development can shorten the hassle and might lead to getting desired end product in a limited time period.

Basically, the testing approach is categorized into two different software testing approaches, which involve manual testing and automated testing, so let’s take a look around some of the aspects like speed, reliability, and quality.

In addition to all this, one of the major benefits that can be delivered using Low-code testing is the expanded coverage of testing, since the testing process is now a bit decent for both technical and non-technical users, this, as a result, gives maximized test coverage in addition to reducing the risk for application delivery.

Another major issue that one might get along with is the end-to-end testing; as I have already mentioned earlier that low-code development can help in various aspects such as UI, data logic, integration, and much more. The end-to-end testing help in giving the testing process a look from a user’s perspective, which as a result can help in verifying the information flow between different applications, marketing platforms, firewalls, and much more.

Since we are already looking forward to making things easy for the testing and software development, there is something else that can be considered while developing and testing of software, this basically includes the Automated API testing, and this helps in the meeting of the clients’ expectation in terms of functionality, reliability, security and performance; therefore let’s take a look at some of the tools and features that can be extracted using the automated API testing.

As I have already mentioned, API testing can be considered as one of the helpful ways of making things great from a client’s perspective. In simple words, API testing can be considered as a type of testing that involves the program interfaces directly, meanwhile also looking forward to the integration part if the things have matched as per the client need in terms of functionality, performance and security. The API exchanges the data between different software systems. The reason why I mentioned API testing over here is the benefits that it serves, so let’s take a look at them:

In addition to all this, Automated API testing includes several types of additional automated testing, which include penetration testing, security testing and load testing.

Why Should You Consider Adding A Learning Management Software Platform For Your Workforce?

5 Tips on How to Effectively Control a WhatsApp Group