Home > Technology > What is Anti-Aliasing? 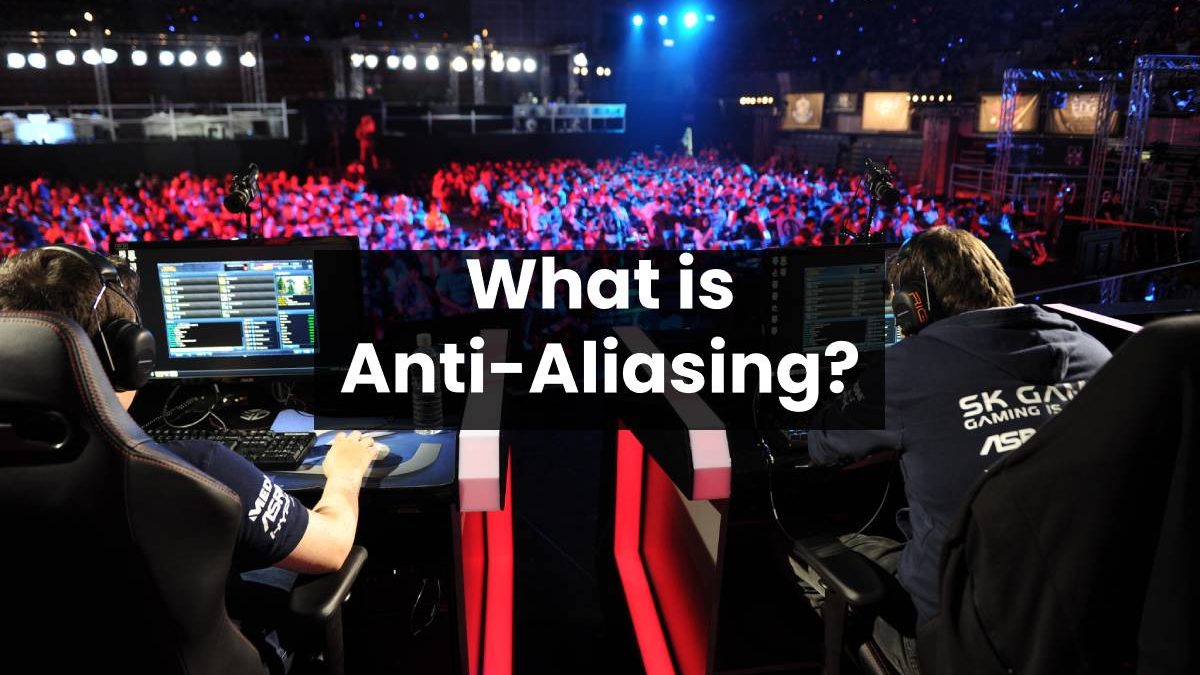 Anti-aliasing is a process that has been used for years to get rid of the jagged edges on computer screens. It encompasses a variety of techniques, but the most common one you hear about is subpixel anti-aliasing.

This means that instead of using whole pixels, it uses subpixels. Subpixels are smaller than regular pixels and can be in different places. The color for each subpixel comes from an average value determined by its neighbors.

A large portion of the graphics processing unit’s power is used to determine these values and calculate what color should be displayed.

The result is a smooth transition between colors without jagged edges, which enhances the overall picture quality. Anti-aliasing has become an integral part of any game or movie you watch on your computer as it creates a smoother image with sharper detail than could otherwise be rendered at such high resolutions.

There are other types of anti-aliasing including adaptive anti-aliasing (AA) that can change how aggressive they process depending on the current frame being drawn by assessing whether there is movement in a scene or not. AO ambient occlusion accentuates shadows by simulating local lighting conditions based on the position of objects and the viewer’s point of view.

There’s no need to go back and rehash old techniques from before because this is the most common way to get AA from your graphics card – MSAA or SSAA, FXAA, MLAA, SMAA, or TXAAs like DLSS that could help reduce aliasing without needing tons more processing power from your graphics card or CPU while still being able to provide similar quality images in games like Final Fantasy XV where you need higher resolutions if they’re going to look good enough when playing them at high framerates.

What Does Anti-Aliasing Do?

Anti-aliasing removes the jagged edges of objects, making them smoother and more realistic. It can also sharpen a picture by removing any pixelation that would otherwise be seen with high resolutions in pictures or video games.

This is accomplished by displaying pixels not as whole units but instead on subsections called subpixels, which are treated as averaging values for color from their neighbors to produce an anti-aliased image.

Without the use of this process video game graphics and movie scenes could look very fuzzy or grainy at higher resolutions because they cannot usually render images much sharper than what you see on your computer monitor without it being pixilated.

The goal of anti-aliasing is to remove the jagged edges from an object. This process has been in use for years and can be accomplished by many different techniques with subpixel, or more commonly called sub-pixel, being the most common one that you hear about.

Subpixels are smaller than regular pixels and they provide a smoother transition between colors without any jaggedness because it comes from an average value determined by its neighbors.

The color given to each subpixel depends on what would look better visually rather than having sharp lines everywhere which look bad when displaying images at high resolutions like movies or video games.

What Types Of Anti-Aliasing Are There?

There are other types of anti-aliasing beyond just the subpixel technique. Adaptive anti-aliasing can change how aggressive they process depending on what is being rendered at the time and AO ambient occlusion accentuates shadows by simulating local lighting conditions based on where objects or your point of view are in a scene.

The goal for any type of AA is to remove jaggedness from an object, while also making it smoother and more realistic as well as sharper when displaying video games or movies with high resolutions that would otherwise be pixilated if not done properly.

This is the type of anti-aliasing that most people know about and stands for multi-sample anti-aliasing. It has been around for years with newer versions coming out as graphics cards continue to get more powerful so there’s no need to go back and rehash old techniques from before because this is the most common way to get AA from your graphics card.

This stands for supersample anti-aliasing and it is a little more complicated than MSAA but in a different way too because this technique renders an image at one higher resolution, then downscales to its original resolution with algorithms called subsampling.

It’s been around longer than other types of AA so there are newer versions that better optimize rendering times or allow you to use GPU acceleration on older models if they support it as AMD cards do for SSAA.

This is what you might call post-processing anti-aliasing because it’s done after all pixels have been rendered on the screen rather than in real-time. It uses low-quality algorithms but can be faster as well since there are fewer calculations needed to do these types of filters like blur or sharpen images based on their position when they were drawn onto screens.

has become very popular with video games due to how quickly they can utilize this type of filtering while still providing the same quality as other types of AA.

This method uses a pre-calculated grid to determine where the edges should be drawn and then blends them into their surroundings.

This type of algorithm is able to provide anti-aliasing for games that don’t support it natively by making a few modifications and changes.

This is a post-processing AA technique that does the same thing as FXAA, but it combines all of these low-quality algorithms into one to make it more effective while still being at least half as fast.

This is a new type of AA that Nvidia has been working on for years with hardware and software engineers to make it better than other types. The difference between DLSS and other methods is its deep learning algorithm which uses the power of GPUs but needs fewer samples as well as rendering paths to get these results.

It may not be perfect yet, but this method could help reduce aliasing without needing tons more processing power from your graphics card or CPU while still being able to provide similar quality images in games like Final Fantasy XV where you need higher resolutions if they’re going to look good enough when playing them at high framerates.

It’s a rare type of AA because not many people are working on improving how this technique looks with new features like HDR or colorization, but there was an improvement from the original algorithm in 2006 that used stencil shadows and other changes to make it better than previous versions.

This stands for coverage sampling anti-aliasing which uses less memory than other types so if you have older graphics card models then CSAA is worth considering since you might be able to get higher resolutions without needing more storage space too.

It could also help reduce aliasing and pixelation when playing games at high framerates while still getting a good level of detail even though there are fewer samples.

These are just some of the many different types of AA that exist in order to make video games or movies look better when they would otherwise not with higher resolutions like 1080p, 1440p, or even up to 3840×1200 resolution screens on your computer monitor without making it pixilated.

Subpixel Anti-Aliasing (SAA): The most common one you hear about this technique is the sub-pixel. It uses smaller pixels to create the final image, which results in smoother transitions between colors.

Adaptive Anti-Aliasing (AA): This technique can automatically change how aggressive they process depending on what is being rendered at the time by assessing whether there is movement or not to find a balance between quality and speed of rendering frames with high resolutions that would otherwise be pixilated without AA techniques like subpixel antialiasing.

AO Ambient Occlusion: AO ambient occlusion accentuates shadows by simulating local lighting conditions based on where objects are and your point of view. It’s used for images with high contrast ratios that would otherwise appear flat when displaying them without AA techniques like subpixel antialiasing.

Which Anti-Aliasing Technique Should You Use?

If you have the money and are playing games with expansive environments then it might be worth looking into TXAA (if supported) because DLSS seems like an expensive way for lower-quality graphics.

If you’re just playing single player RPGs or fighting games or something where framerate isn’t much of a factor then SMAA could work out better for you if your system can handle it while also giving similar quality as MSAA without costing any additional processing power on top of what would already be needed in order to run the game at higher resolutions.

Higher resolutions mean more processing power, but if you have a fast enough machine then higher resolutions like 1440p are worth using with high levels of AA like DLSS or TXAA in order to make sure that aliasing problems don’t interfere with gameplay.

At this point, most people probably won’t need FXAA anymore because newer cards come with MLAA built right in so there doesn’t really seem to be much of a reason to use it.

Anti-aliasing is a process that helps to smooth the appearance of computer graphics on the screen. This technique can be used in digital marketing and design by creating more realistic images with less pixelation or jagged edges.

We hope this post has been helpful for understanding what anti-aliasing is, how it works, and which types are most effective at improving your website’s user experience.

If you want help implementing these principles into your own designs or need help deciding which type of anti-aliasing would work best for you, please reach out! Our team will happily provide free consultation services to answer any questions about our strategies so we can make sure they’re right for your needs.

Review What is Anti-Aliasing?. Cancel reply

Bitcoin as a Long Term Profit Generation Plan for Investors

Chargeback Fraud: What Is It & How to Fight It?

6 Professional Tips on Taking Care of Your Ink Cartridge