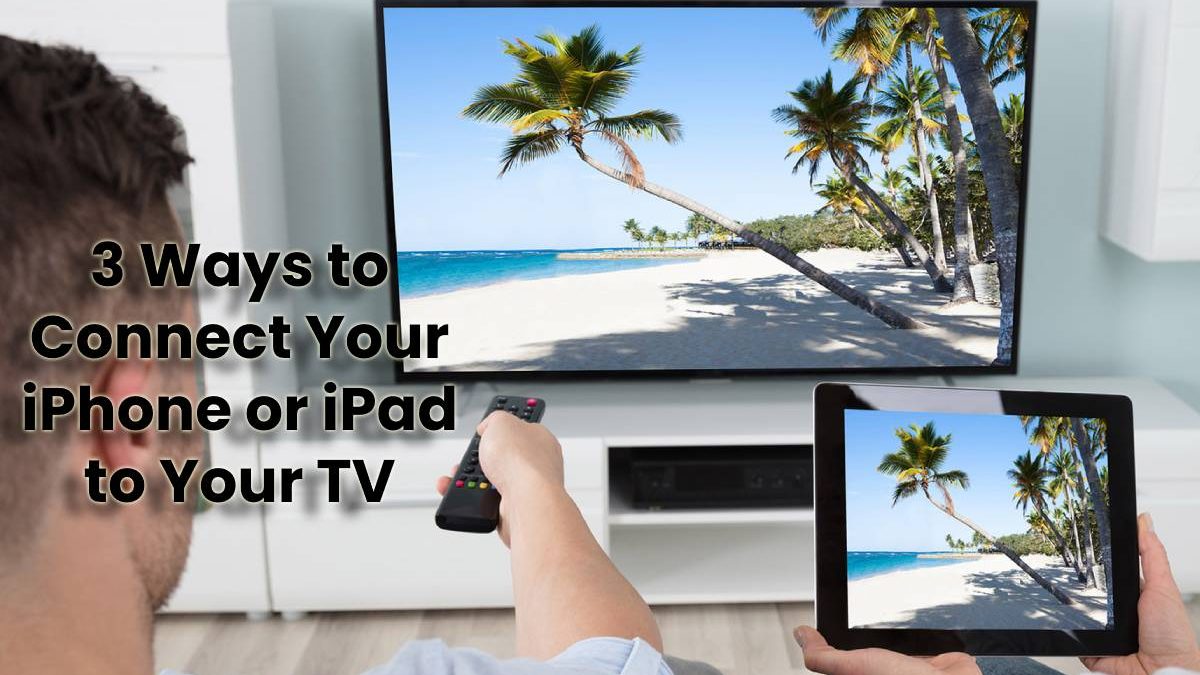 Ways to Connect Your iPhone or iPad to Your TV

Remember that if you want to view streaming services like Apple TV+, Netflix, or Hulu on your television, mirroring your iPhone or iPad is neither essential nor feasible. Instead, you may invest in a low-cost streaming media device like the Roku Streaming Stick+ or Amazon Fire TV Stick 4K, put it into your TV, and control it with a real remote. Click here for our top Free-to-Air TV providers guide.

Mirroring is still helpful if you want to playback movies you’ve recorded on your smartphone, show off your picture library, create a slideshow, surf social media communally, or show off your iOS gaming talents on the big screen. Continue reading to learn how to connect your iPhone to TV.

Connecting with an HDMI Cable

A wired connection is the easiest way of connecting an Apple device to a television. You may utilize Apple’s Lightning Digital AV adapter for an iPod touch, iPad, or iPhone with a Lightning connector, which costs around $40. While external adapters are less expensive, keep in mind that they won’t work with copy-protected streaming video applications like Netflix. You’ll also need to arrange a cable on your own so purchase one that is long enough to help sit on a couch away from the screen.

Simply connect the HDMI cable to one end of your TV and the converter to the other, connect the cable with your Apple device and the television to the proper input. To protect your iOS device’s battery from depleting, put a charger into the adapter’s second input.

The majority of applications will simply mirror the display of the iOS device onto the screen, however, video apps like and Netflix and Amazon Prime may provide permanent playback facility while the film is playing on the TV.

If you don’t want to be bothered with wires, you can use the wireless AirPlay protocol to broadcast movies and music to any Apple TV. This lets you mirror the display of your iPad or iPhone on the big screen or broadcast video and audio from compatible applications.

Here’s how you mirror the display on your iPad or iPhone:

Make sure that all your devices have the same Wi-Fi connection.

Bear in mind that mirroring isn’t required for many audio and video apps. Instead, just click the AirPlay option while listening to or watching a video. Select Apple TV from the menu list (it seems like a TV with a triangular shape at the end). Alternatively, open Control Center and select the AirPlay option.

If you’re missing out on Apple TV and don’t want to spend the money on an adapter cable, you may utilize screen mirroring apps to display your iPad, iPhone screen on Fire TV, Chromecast devices, and Roku.

Several apps claim to do this, with varying degrees of success but consulting’s Screen Mirroring apps for these apps work well. These apps capture video from your iOS device and broadcast it to the streaming player using iOS’ Screen Recording functionality. (You’ll need to download a separate app on the player for the Roku and Fire TV apps, but the iOS app will walk you through the procedure.)

There are a few drawbacks: there will be some latency, the video quality isn’t ideal, and unless you upgrade to the paid versions of these programs, you’ll have to go through an ad before you can mirror. These programs, however, are enough for mirroring photographs, websites, presentations, and social media feeds.

Be aware that you can broadcast video, audio, images, and information to your TV with Chromecast from thousands of apps. You won’t need to mirror your iPhone or iPad display because these apps will allow you to play content straight on the television.

Review 3 Ways to Connect Your iPhone or iPad to Your TV. Cancel reply

Kartra Alternatives: 4 Great Tools That Will Cost You Less

Amazon Echo vs Google Home – Which One’s the Best?