Home > Technology > Should I pay for Antivirus? 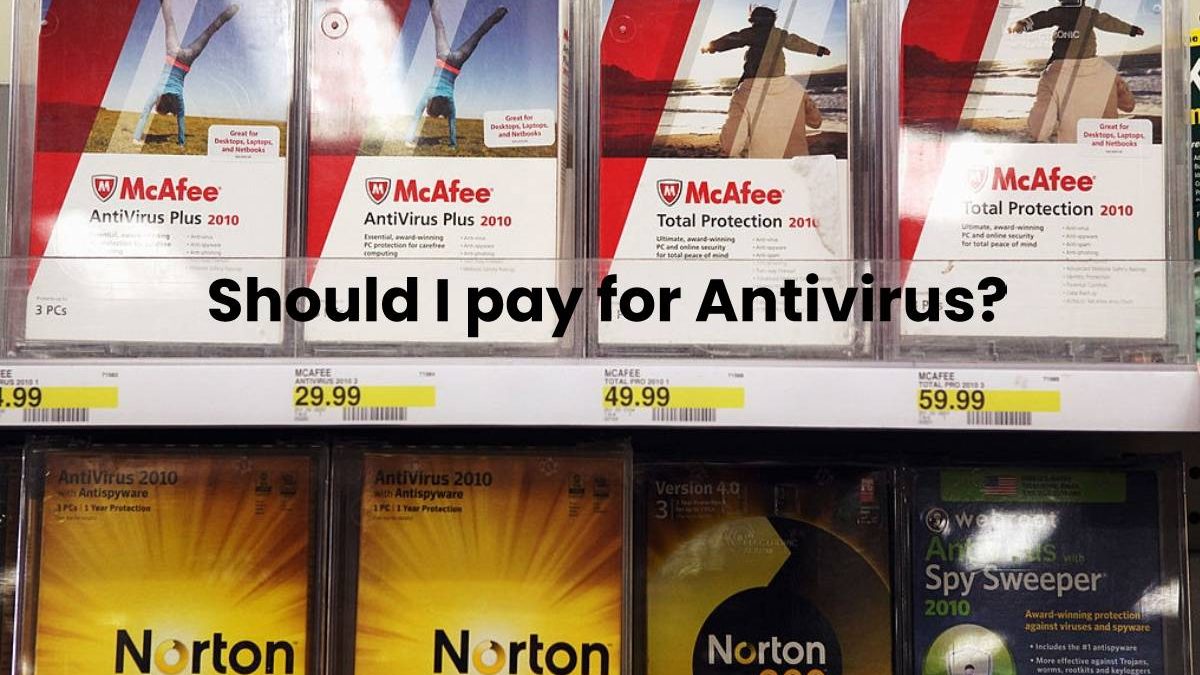 Should I pay for Antivirus?

We are living in a free digital world. Almost everything around the internet is available for free or at a very minimal cost. We have free maps, free navigation, lots of free mobile and desktop applications, free audio and video calls and also free antivirus programs.

According to a survey conducted by the “Which?”, almost 90% of the laptop and mobile users have antivirus software installed in their devices. Only 50% of those uses the additional paid features like VPN, password manager or secure browser.

So, the question arises- with lots of free packages of antivirus available, is there any benefit of buying the paid version? Let us discuss.

While you can save some money by using the free versions of an antivirus, it cannot guarantee you the total security from the threats.

They do come with a good rating, but there is not much they can do.

The main problem with the free versions is that they cannot keep themselves updated with the dynamic changes around the internet. Every day a new threat is introduced in the online world and these free antivirus programs can’t update themselves to cope with them effectively.

Also, these free versions come loaded with pop-up ads that can slow down your devices. Most of them provide only basic security and ask users to buy their premium package for all functions to work. If you are using multiple devices then most of the free version antivirus programs will not provide security to all the devices simultaneously. There is also the threat of disclosing your personal information.

Should I use only Windows Defender?

Windows Defender is the free antimalware from Microsoft, which comes pre-installed in your Windows devices. It was previously known as “Microsoft Security Essentials”. Earlier it was not even considered as antivirus software because of its minimal services, but with latest changes, Microsoft has improved it a lot.

There are many benefits such as it provides firewall protection, it reports the fewer false results as compared to others, it slows down the web browsers by just 4% as compared to the industry average of 10%. But again, since it is free, it covers only the basic security measures.

It usually slows down the installation of application as compared to other antivirus programs. It is quite vulnerable to user error. Also, it can’t be relied upon to get any advanced cybersecurity measures.

Overall, Windows Defender is good for the users who are mostly offline and only needs basic security.

For getting the additional features of antivirus programs, instead of buying the premium version, some opt for cracked or pirated version of the software.

While these pirated versions will work for a time being, but again they come with a lot of problems. Take an example of freely available bitdefender activation keys.

First of all, it is illegal to crack and use pirated software. Secondly, you can be a victim of a virus attack. Most of the activation tools come with malware. Thirdly, if they are genuinely cracked too, then also it doesn’t guarantee you to save your device from the latest threats.

All and all, it is too risky to get involved with the pirated versions of the antivirus programs.

After knowing the limitations of free antivirus programs and threats of using pirated versions of them, let us now discuss why the paid version is a better choice.

Paid version not only provides complete protection from any type of latest or oldest threats, but it also comes with a lot of other options.

It will provide you with excellent customer support along with safeguarding your identity. During online transactions, it will provide you with an extra layer of security. Also, the paid software provides other great benefits which free version doesn’t provide such as password manager, parental control, VPN, anti-ransomware and the most important-multiple device support (according to the chosen plan).

When it comes to the security of your devices, putting a price tag is difficult. With the advancement of technology, every other day new threats are emerging. To tackle them, low-end security is not good enough. Your system should be advanced and capable enough to identify those threats and defeat them. Buying an antivirus package is a small price to pay for securing your vast data from the external threats.

Cybercriminals are now eyeing for the vast amount of personal data on your smartphones, laptops or personal computers.

They can use these data to steal your money, ask for the extortion in return of not leaking your private data. The free antivirus programs are not capable enough to save you from such threats.

Review Should I pay for Antivirus?. Cancel reply

The Evolution of Typography in Web Designs

How Cloud Hosting Act As A Magic Wand For Small Businesses?

5 Benefits of Outsourcing Remote IT Support

Maximize Your Crypto Trading Signals Trading cryptocurrency is more effort than a lot of people realize. It takes careful planning…

Staying In? 4 Gadgets for Cozy Movie Nights at Home

Protect Your Business Against Cybercrime With These 10 Tips

Cybercrime is more common than you believe. Read on to discover the best cybercrime prevention tips to keep your business…