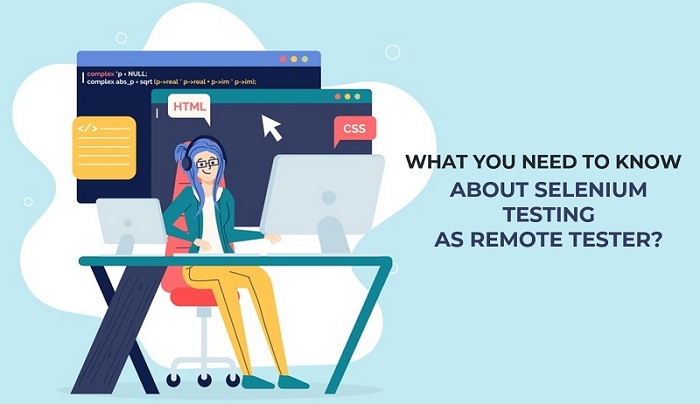 What You Need To Know About Selenium Testing As Remote Tester

The internet has become an integral part of our lifestyle, and nobody can deny that. Lots of businesses and firms are operating on the internet – the new and the older ones too.

To stay relevant, they need to keep their websites accessible, attractive, and user friendly. But how do they know what’s working on their website and what’s not? Enter Selenium Testing.

Selenium is an open-source, portable framework focussed on testing different aspects of your website and web-based applications. You can write tests in C#, Groovy, Java, PHP, Python, Scala, etc.

Licensed under Apache 2.0 (which means users can distribute, modify, and distribute modified versions of the software freely), it can run tests against various modern and legacy browsers.

Initially developed by Jason Huggins in 2004, it is compatible with Linux, Windows and macOS. It not just tests websites and web applications but instead automates the process of testing.

Before selenium testing, the job was done with testers comparing actual outcomes with predicted outcomes manually. Now you can write small scripts in different languages, and Selenium will do everything else.

Selenium was initially developed as an internal tool. Later, different programmers came together to make it what it is today, a collection of different components. Each Selenium component is used for different goals, but collectively, they serve the same purpose.

Things You Need To Know About Selenium Testing

This article assumes you have little information about web testing and you know what is Selenium and what it does.

Selenium IDE should be used as a prototyping tool. It is easy to learn and requires no programming knowledge at all. Selenium RC stands for Selenium Remote Control and performs looping and conditional operations.

Webdriver helps automate the browser’s actions and is easier to install and work. Selenium Grid is used together with Selenium RC to run parallel tests on multiple machines and browsers.

IDE stands for Integrated Development Environment. Selenium IDE creates a virtual environment where the user can deploy their web applications and test them against various test cases.

It is a Chrome extension and Firefox add-on aimed at automatic testing of web apps. It has been designed to create a prototype of the tests, and it even provides supports for extensions.

Although Selenium IDE is a beneficial tool, it has some cons too. It doesn’t support iteration and conditional operations. It’s also very slow when compared to other components of the Selenium Suite.

It is the flagship Selenium component which is being used for testing since a very long time. It is based on Javascript. It has faster execution than IDE and supports data-driven testing.

Javascript codes cannot access elements from those domains which are different from the domain which launched those elements. It is called the “Same Origin Policy Issue.”

Due to the Same Origin Policy Issue, Selenium RC needed local copies of both selenium core and the testing web server. This process makes sure that both belong to the same domain.

However, installing Selenium RC is more complicated, and you would need good programming skills to master it. It has a slower execution than WebDriver, and browser integration is less realistic.

It is better than both the Selenium IDE and Selenium RC in numerous ways. It is faster, has a simple installation process, and does not need a separate component like Selenium RC.

It communicates directly to the browser and controls it at an OS level. Simon Stewart created it in 2006. The biggest drawback this tool had that it has no built-in mechanism for logging runtime messages and generation of test results.

Unlike Selenium IDE, it requires good programming skills to master it too. To overcome these shortcomings, Selenium Grid came into play.

Selenium Grid is the most versatile tool in the Selenium Suite. It allows running tests in multiple browsers and environments simultaneously, which saves lots of time.

It contains a central source which stores all the Selenium commands and then sends it to different nodes. It can help you run a vast test suite, and that too in the shortest time possible.

LambdaTest is another tool that helps you perform automated cross-browser testing on real browsers and online operating systems. You can even check the responsiveness of the website with just a single click.

Selenium Remote Control is also referred to as Selenium 1. It was the flagship testing tool of Selenium Suite and depended on the core libraries upon which any browser supporting javascript would run.

Selenium 2 is the updated version of Selenium 1. WebDriver and Selenium RC were combined into a single framework. It also uses multiple programming languages like C#, Perl, Python, PHP, etc.

WebDriver contributes its object-oriented API for the Document Object Model (DOM). It is faster than Selenium 1 and is preferred by many people.

Selenium 3 is not based on ‘Selenium 1 core’ like Selenium 2 did. It is independent and provides a better testing experience than its predecessors.

Selenium Suite is a highly useful tool for websites and web applications testing. It has been in the market for about 15 years now. It has only improved and got better since that time.

Selenium 3 is already being used in many places. It uses tools such as Appium for mobile automation which is excellent for testing for even mobile phones.

However, a lot of people still use Selenium 2 as it supports Selenium RC API and Selenium RC technology below the WebDriver API altogether.

For better cross-browser testing requirements, you can bank upon LambdaTest for all your needs. Happy testing!

Review What You Need To Know About Selenium Testing As Remote Tester. Cancel reply

Why It's Time to Replace Email Proofs - Email Vs Online Proofing

Diabetes Technology & Therapeutics: Everything You Need To Know

How Many Followers Do You Need to be Instagram Famous?

What is a DDI solution and why do you need one?