Home > Technology > What is an IoT eSIM and how does it work? 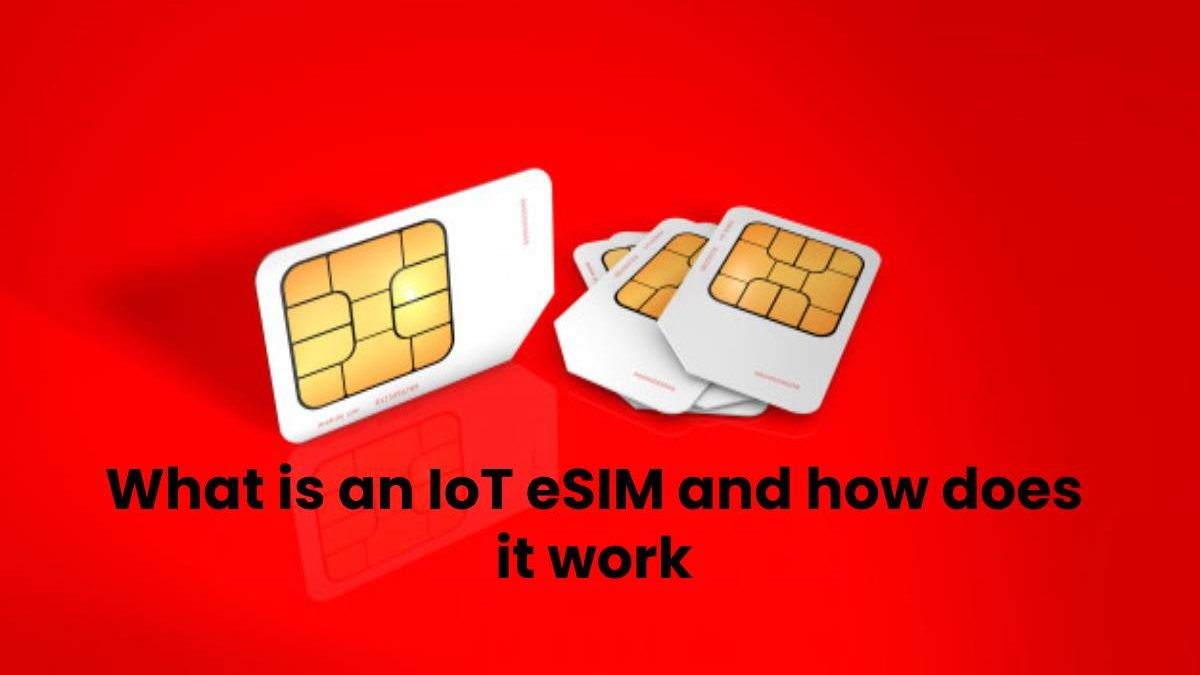 What is an IoT eSIM and how does it work?

The SIM (Subscriber Identity Module) card has been the staple way for our smartphones, tablets, and other devices to connect to the cellular network whether to make phone calls, send text messages, and access the internet.

In IoT implementations that involve smaller and smaller devices being deployed in challenging environments, however, a tinier SIM card that is also more durable is needed. This is where the IoT eSIM (embedded SIM) comes in.

The eSIM is only 5×6 millimeters in size, much smaller than the traditional nano-SIM. Not only it is smaller and stronger, but the eSIM is also smarter: it can download subscription data over the air, meaning you can switch between carriers, plans, and network types (LTE, 3G, 5G, etc.) without needing to change your physical SIM card.

Here, we will discuss the eSIM, its implementation in IoT, and its benefits in scaling our IoT network.

What Is an eSIM?

An eSIM, as discussed, is an embedded SIM (also called electronic SIM). In older devices (and even newer phones), we have an empty SIM card tray where we can insert the physical, traditional SIM card in. However, an eSIM is integrated into your phone/device in the form of a very small chip that is built right into your device.

There are, in fact, many benefits we’ll get from this major change in design, but there are three most important ones:
1.Switching between carriers

The traditional SIM card can only store one subscription data tied to a network carrier. For example, if we want to switch from AT&T to Verizon, then we’ll need to manually change the SIM card by inserting the new SIM card from the new provider into the SIM card tray.

However, the eSIM technology can download different subscriber data from different network devices, so you can easily switch carriers just by tweaking the settings on your device without needing to switch the physical SIM card.

This is especially beneficial if you travel a lot, so you don’t need to swap SIM cards when you travel physically. You can get an international data plan like Truphone’s iPad data plan with coverage in 188 countries.

With this feature, you also get versatility in customizing your plan according to your needs and use more than one plan. For example, you can set up one line for data with carrier A and another line for voice calls with carrier B.

Another benefit that is especially important in IoT implementation is the SIM card’s durability. Since an eSIM is built in the device and is protected by the device’s outer shell, it is durable and can withstand impact, extreme temperatures, weather, and other issues.

In IoT networks, small sensors might be deployed in environments with tight spaces and harsh conditions, so this is a very essential feature to have.

As discussed, the eSIM is much smaller than traditional physical SIM, even the smallest nano-SIM. Also, it eliminates the SIM card tray which can eat a significant amount of space in any device. So, an eSIM allows a smaller device design, which is really useful in wearables like smartwatches, fitness trackers, and IoT sensors.

Also, we can’t bend physical SIM cards. So, by eliminating the traditional design, we can accommodate more flexibility in the device’s design.

How Does an eSIM Work?

The technical name of eSIM is eUICC, which stands for Embedded Universal Integrated Circuit Card.

The eUICC has two major features that differentiate it from traditional SIM cards: integrated installation and remote provisioning. Meaning, the device manufacturer can solder the eSIM directly to the motherboard of the said device.

Remote provisioning, on the other hand, provides us with an easier, more intuitive way to activate and manage the connected devices. In short, it provides us with an easier bootstrapping (the process of connecting a brand new device to the network right out of the box) where the process can be fully automated without us needing to install a physical SIM card or visit a network provider’s store.

For example, if you have an iPhone with eSIM (or Apple SIM) and you want to sign up to a new network carrier on top of your existing one, then you can simply download an App from carriers that supports eSIM, like Truphone’s App, sign up on a new plan (or a free trial), and you are good to go. The providers can also share a QR code or even an URL where you can simply activate your new plan from the link. Very simple and convenient.

How To Use eSIM With iPhone?

If your iPhone or iPad comes with an eSIM or Apple SIM (Apple’s version of eSIM in older iPhone/iPad models), then you can activate a carrier plan on your iPhone right away:

If you have a QR code from your network provider.

1. Go to Settings then Cellular

3. Use the iPhone/iPad to scan the QR code provided by your carrier. You can also tap on Enter Details Manually if you get activation codes from your carrier

1. Go to App Store and download your carrier’s App (or you might be provided a link by your carrier)

2. Use the App to purchase the plan you want

3. Tap on Add Data Plan after the purchase

How To Use IoT eSIM with IoT Device?

To use the eSIM in an IoT device, then we’d need an IoT SIM provided by a carrier that supports bootstrapping.

Bootstrap connectivity allows any device that is brand new to connect with your network straight out of the box. You’d need to choose an IoT specific data plan that supports bootstrapping, where you can use a centralized IoT management platform (provided by the carrier) to bootstrap new devices, monitor all devices, and manage all your devices from a single API.

An IoT eSIM is especially useful in ensuring your IoT network’s scalability due to this bootstrapping feature: even when you are going to add a new device in another country, you can easily bootstrap the device and add it into your existing management software without too much hassle.

Review What is an IoT eSIM and how does it work?. Cancel reply

What is a Computer Network Technician?

Effective Adoption of SASE in 2022