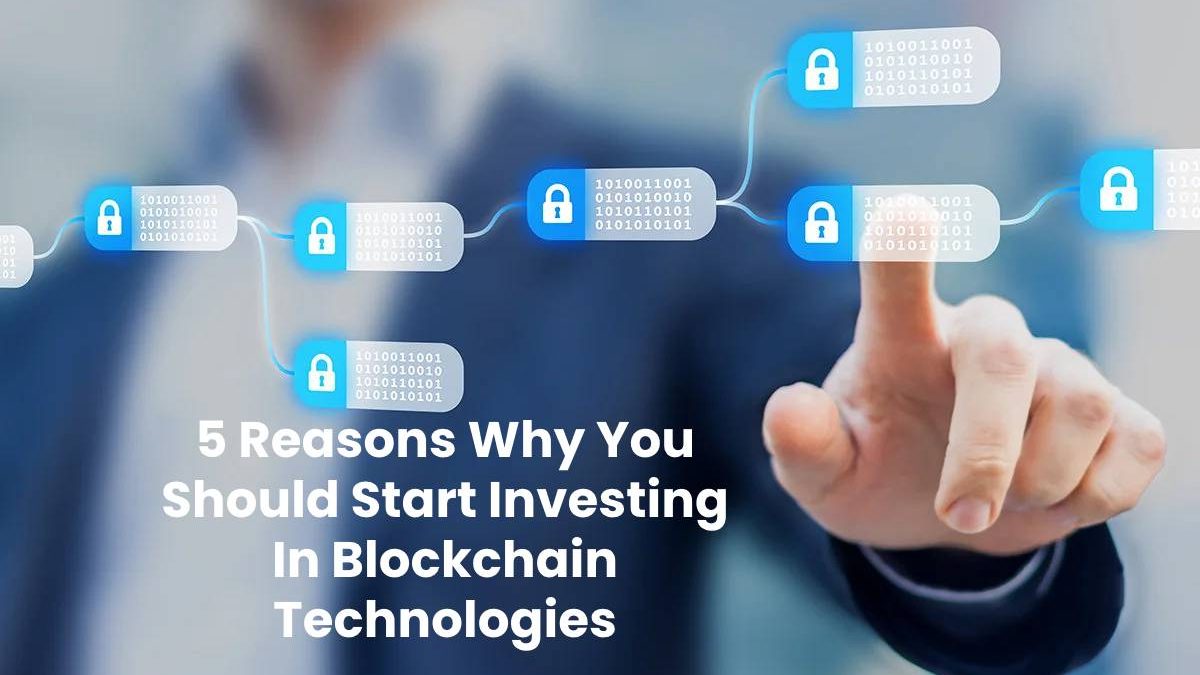 5 Reasons Why You Should Start Investing In Blockchain Technologies

In the last decade or so, technology and digital platforms have changed the way we live. Apart from creating internet-only businesses, technology has been able to revolutionize practically every sector of our being.

From shopping online to availing information to sending money across countries and continents, the rise of technology is for everyone to see. In the sphere of finance, Cryptocurrencies like Bitcoin have unleashed a fresher understanding of money!

While a lot of attention has been paid to cryptocurrencies like Bitcoin per se, the underlying technology that runs its network has not been discussed much. Blockchain Technology is something that is being explored as we speak by some of the biggest titans in the industry.

In this resource article, we are going to look at five reasons why you should start investing in Blockchain Technologies. Before we get to the list of reasons, let us first discuss the meaning and definition of Blockchain in brief details.

The easiest way to understand Blockchain is thinking of it in terms of a large digital spreadsheet. We all have some experience or the other on excel sheets. A Blockchain is like a network that works to store, process, and record every kind of transaction data.

There is a reason why it is being rated so highly. Not only is it a fast and efficient way of doing transactions, but it is also immensely secure. No one entity can alter the blocks. This means that it cannot be hacked! This is something that businesses want in an age marred by cyberattacks.

Would you trust someone with payments when they are sitting thousands of miles away after sending your goods? Quite difficult, right? With Blockchain, you know whether the person is capable of making payments by looking at their records. This means that the one thing that businesses want most- ‘trust and transparency’ is secured through the Blockchain.

Investing in Blockchain-based businesses and start-ups is like investing in the future. From healthcare to legal fields, Blockchain technology is going to be adopted sooner rather than later. If you are someone that is looking to enjoy the first mover’s advantage, then this is the industry for you. There is no speculation like cryptocurrencies. It is all about core technologies.

In the last few years, questions on data management and governance are picking steam. Given the new-age importance of data as the ‘new oil’, it is but natural that businesses are looking for ways and means of protecting the same. With Blockchain technology, you have the world’s most secure and efficient way of storing, processing, and accessing data.

Businesses are spending trillions of dollars to reinforce security. With nearly all operations shifting online, building cybersecurity infrastructure is the need of the hour. Given how attacks have grown by 3X times ever since the pandemic started, Blockchain can be the answer to the world’s cybersecurity problems. In the coming years, this will be the only option for businesses.

If you have been reading the news, you know how Bitcoin and other cryptocurrencies are shattering all growth records. For example, the bitcoin profit platform has become one of the most sought-after ways that investors are looking to grow investments. This not only runs on Blockchain but so do hundred other applications. Bitcoin’s growth will help Blockchain.

In the next few years, Blockchain Technology is going to emerge out of the shadows of its big brother (Bitcoin). With some of the world’s biggest businesses setting up Blockchain teams, this just might be the next big technology being adopted by the world. If you have any other questions, that you would like us to answer on Blockchain Technology, let us know in the comments below.

Review 5 Reasons Why You Should Start Investing In Blockchain Technologies. Cancel reply

Do Slots Dominate The Casino Industry?

When And What To Expect From Sony Playstation VR 2

4 Common AWS Cloud Security Challenges And How To Address Them

8 Reasons Why MVP Can Go Wrong