Home > Technology > Can a Programmer Be Sued for “Bad Code”? 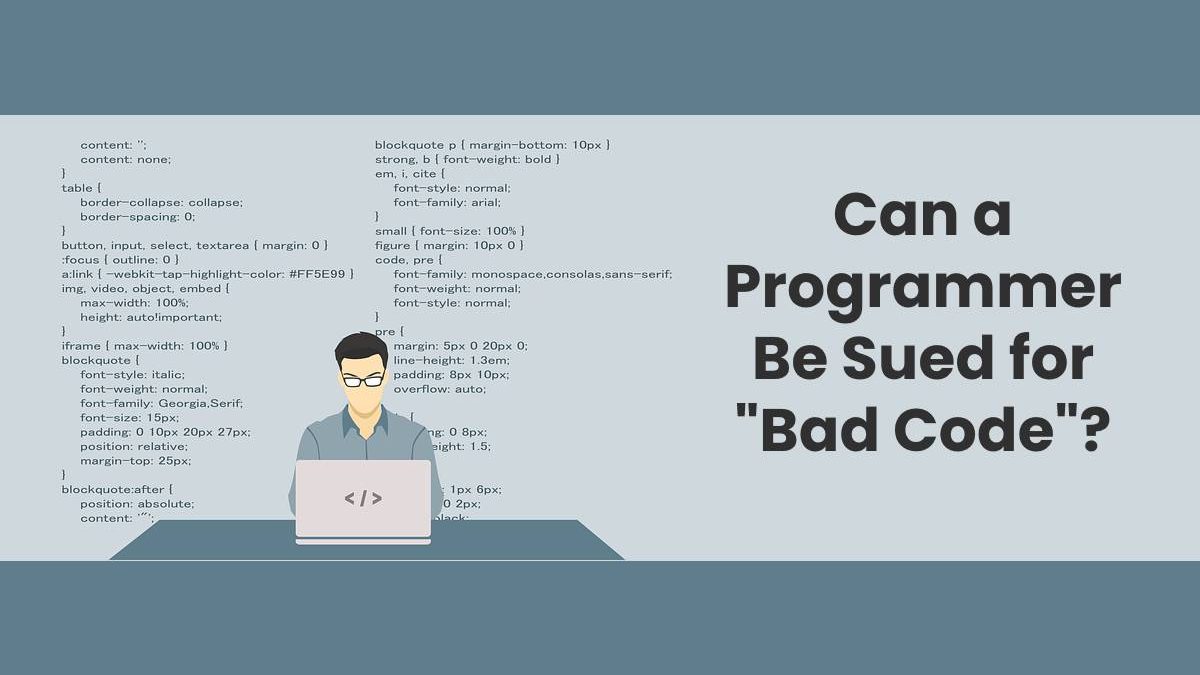 Can a Programmer Be Sued for “Bad Code”?

Can a Programmer Be Sued for “Bad Code”

Suppose you have spent time developing and installing a multi-million dollar computer system that can be used to dispatch ambulances and allow first-responders to locate them in any part of the country during an emergency. In that case, it can be a huge disappointment if the system fails to work.

Emergencies call for a quick and reliable response. If your system fails to speed up response time and instead delays or misdirects ambulances, no one will want to use it because such delays can cost lives.

Delayed and unreliable responses are not just hypothetical scenario. Similar situations happened in London in 1974, again in 2006, 2011, and 2012. In all these cases, the London Ambulance System was counterproductive. The system was tainted with crashes, bugs, and other problems because of poor programming.

Who Is To Blame For Such a Catastrophe?

Since unexplainable delays in ambulance dispatches are mainly caused by poor programming, it begs the questions, is an individual programmer or a team of programmers at fault? Will the insurance or employer be held liable? Will someone lose their job over it? Who will be liable for the financial losses?

As with other legal issues, there are no clear answers to these questions. However, some people will argue that the programmer should be held liable for the fiasco. This is because if programmers code costs lives, should they be allowed to continue coding?

Though software flaws are unavoidable, the software is not just a random natural violation in raw materials. There should be ways to guarantee or improve how it works to ensure that it is always reliable. This may call for sticking to the rules of software creation.

How Should Such an Issue Be Handled?

Apart from the laws that govern such situations in various countries, it is essential to know how to handle software failures and how much responsibility a programmer should bear if their creation fails to deliver what it is supposed to deliver. Should employers take part in the legal liability, and how bad does it have to get before a programmer is sued?

In an article titled The Journal of Defense Software Engineering, the author Karen Mercedes Goertzel notes that no one knows the laws that govern software. Is it a good or a service? Software is also intangible, and USB sticks or CD-ROMs do not count as software. This makes it more of a service and not a product.

The author also mentions that software is not sold. It is licensed, and this, according to the eyes of the law, is a service. However, commercial software delivered to several users from a single vendor is more of a product.

If your code fails to work, you might be found guilty of violating the warranty even if you did not have one in the first place. The End User License Agreements (EULAs) absolves programmers from any liability should their codes fail. This includes situations such as loss of data, the nuclear holocaust and a zombie apocalypse. Apart from these situations, mass-produced commercial software comes with an implied warranty of suitability.

For example, word-processing software should process works well, and a game should be somewhat entertaining. There are some baseline features that your software should perform. This puts you under contract law, and should your code fail, you will be in breach of that contract.

Several plaintiffs have used this strategy to sue programmers who deliver buggy products or do not deliver the expected features. You can be sued for fraud if you knowingly hold back information from a customer or mispresent the software. If the is some vulnerability in the code, you have to inform your potential customers even if you plan to fix it later.

What Else Can You Be Sued For?

If you fail to disclose vulnerability or lie about insufficient testing, you can be held liable for any failure. Lawyers classify software failure under product liability which is also considered a tort. Under tort law, the customer can sue you for a lot more than the price of the software on the systems that run it.

Product liability will only apply if the software’s failure caused actual damage or harm and not just a misrepresentation or inconvenience. Programmers are also held liable for other peoples actions. For example, if a third party such as a hacker finds a weakness in your code and takes advantage of it, you will be responsible for their actions. According to this law, you have a responsibility to ensure that the software is safe.

However, lawyers base their arguments on the concept of reasonable care. According to this concept, you are not expected to be perfect but good at what you do. There are acceptable mistakes, but you must apply reasonable care when building the software.

Software lawsuits are here to stay. Whether they are considered to be implied warranty, a doctrine of contract law, product liability, fraud, tors, or malpractice, your customers can find a reason to sue you if your software fails. Coders or programmers are not above the law, and you should take extra care when building software to ensure that it delivers what it needs to. To know more, talk to reliable employment lawyers in your area.

Review Can a Programmer Be Sued for “Bad Code”?. Cancel reply

Designers notes: How to Create a Design Collaboration Workflow that suits you.

Common Security Issues in Web Design: and How to Fix them