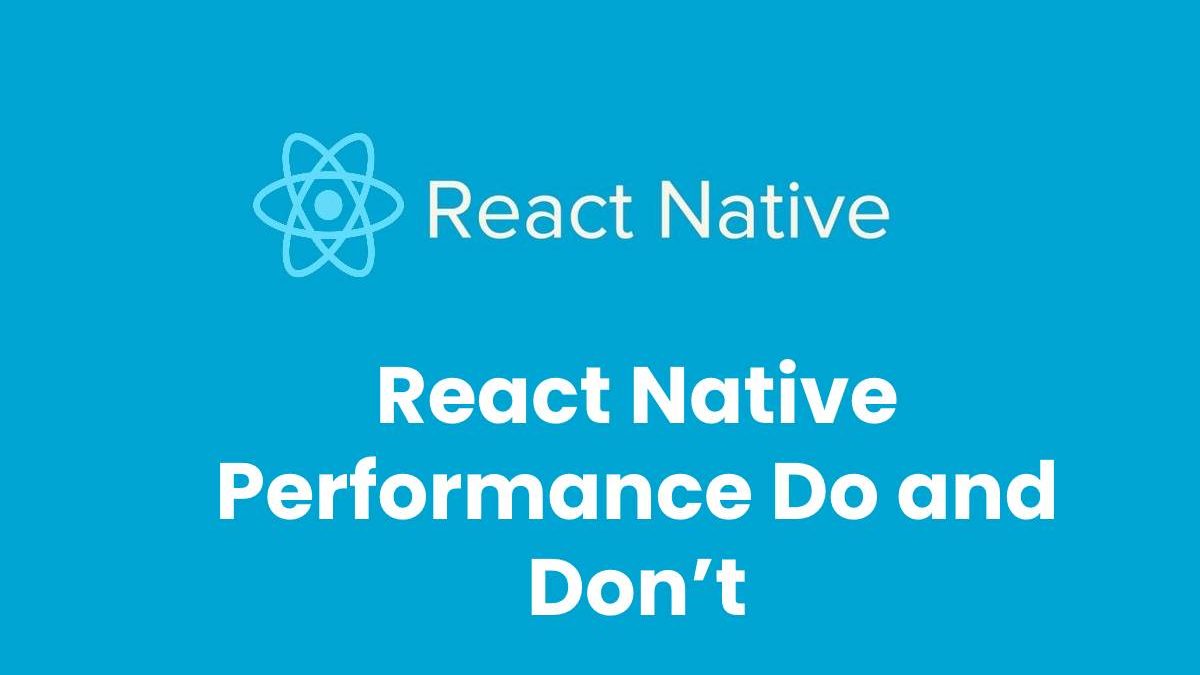 React Native Performance Do and Don’t

Many React Native performance techniques can help optimize and ease your React coding and development journey. However, there are equally many practices in React Native that should be avoided at all costs. React Native is a very flexible platform that provides absolute freedom to React Native developers to experiment and build their React Native apps the way they want. However, it is very easy to fall for some of the React Native app performance bottlenecks without clearing certain concepts and following certain guidelines. For instance, many developers make the mistake of entirely depending on the vast repository of React Native’s library for getting each task of their app done. This increases app size and dependencies while opening up the app to possible security threats. Without further ado, let’s dive right into React Native Performance Do’s and Don’ts –

Irrespective of what kind of React Native app you develop, you will use some of the other images. Images can take up a lot of space in your overall app built. And that is especially concerning if your app relies on different images on several screens. Rendering images can cause high memory usage on the user’s device if the images aren’t properly optimized. This can also lead to the app crashing.

React Native has a popular tool known as Flipper. Flipper is a top debugging React tool for Android, iOS and React Native apps. It can be integrated directly into native code, providing out-of-the-box React Native integration. If you use Flipper to debug your React Native app, you don’t need to set up remote debugging. All you need is a locally connected instance of Metro for interacting with the React Native app. It uses React DevTools to inspect the component tree and examine the props and states of every React component. Flipper uses the native plugin ecosystem for debugging Android and iOS apps. With these plugins, developers can track device logs, networking requests, local databases, crash reports, cached images, etc.

Hermes is a popular open-source JavaScript engine optimized for mobile apps. React Native developers especially prefer it for reducing app download size by impressive margins. It also helps reduce the app’s memory consumption and its overall time to interact (a measure of time taken for the app to become usable). The binary size of Hermes is also significantly smaller than other JavaScript engines. Since it uses lesser memory during runtime, the apps made with Hermes also perform efficiently on lower-end Android devices.

React Native Performance To Do Tip #4 – Use Pure Components

Any static React component, like title, images, and heading can be classified as a Pure Component. A pure component is any component that renders the same output for the same value of state and props. Pure components perform better than standard components as they only re-render when and if their props change; otherwise, React Native re-uses the last rendered result. Hence, you should try to use more pure components in your React Native app.

Although React Native code comes with an Image component, it only does a great job displaying a single image and doesn’t perform all that well when dealing with multiple images. Most developers have noticed a flickering issue when trying to load one too many images in their apps. To solve this issue, you can use an effective image caching third-party vendor like ‘react-native-fast-image’.

If you need to display items on your React Native app, there are two ways you can go about it; using ScrollView or FlatList. ScrollView is an easy to implement method generally used to list a finite number of items. Hence, it is an ideal approach for making a list when you know the number of items on that list, which is quite low. If you try using ScrollView with larger data sets, it can hamper your overall React Native app performance. Since ScrollView isn’t designed to handle large lists, React Native provides an alternative in the name of FlatList. FlatList lazy loads the items making it capable of loading longer lists of items.

Utilizing console.log is one of the most used methods for debugging any JavaScript app, and it stands true for React Native apps. However, one of the most common mistakes that most developers make when using console.log is leaving the console statements in the source code when developing their React Native app. This causes issues and possible bottlenecks in the JS thread. One of the efficient ways to handle and remove console statements from source code is using third-party vendors like babel-plugin-transform-remove-console.

For large React Native projects, when the structure starts becoming complex, you start sharing common patterns across your components. This concept is known as Higher-Order Components. It’s a good practice to use HOC for managing complex requirements; however, overusing it will only increase the complexity level of your code. You should be wary and careful not to instantiate a higher-order component during a render method. React Native doesn’t recognize it as the same component as before and creates a new component instead. This will force React Native to run all lifecycle methods and pressure the reconciliation algorithms.

How Django Development can Send Businesses Online Quickly and Efficiently

How Technology Makes It Easier to Meet New People

Why Are Consumers Choosing TV Internet Phone Bundles in 2022?