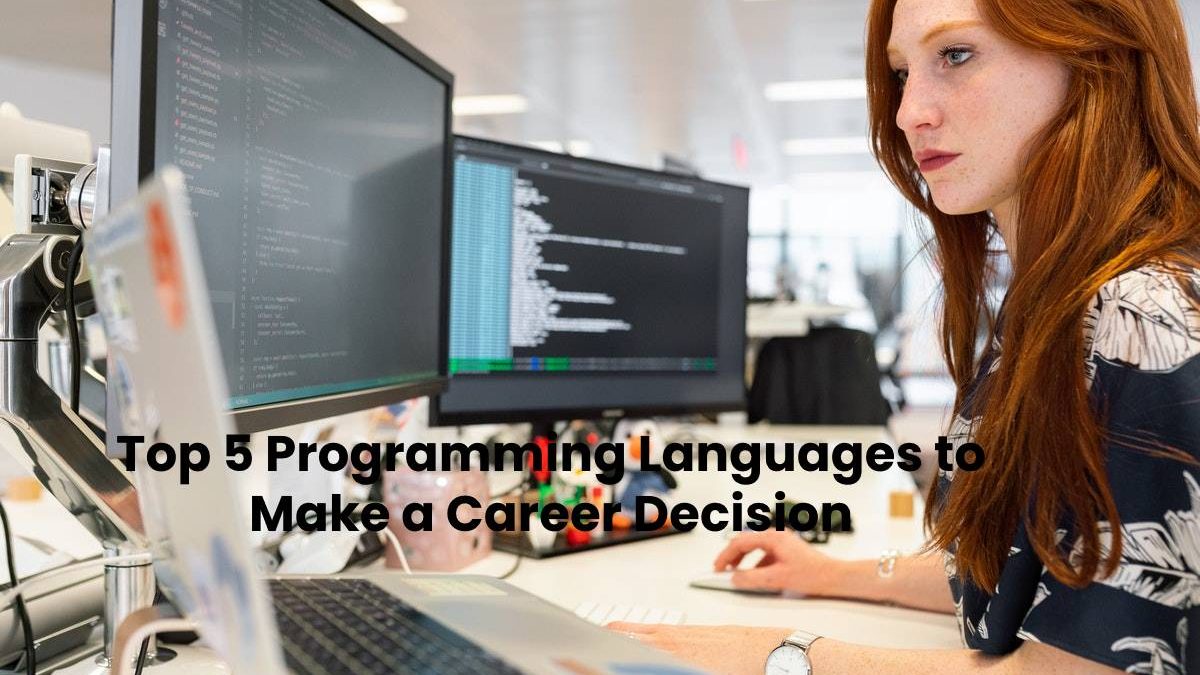 We’ve seen huge changes to the manufacturing sector due to the Industrial Revolution, and now we see a new type of revolution of the digital kind. Developments and advances in digital technology, in particular, have taken off since the turn of the century.

Software programming has become an important and very lucrative component of this. If you’re search for a career path, don’t think twice, a career path in technology is an excellent decision, specifically coding. That’s where the world innovation goes.

To illustrate the size and growth potential of the programming sector, the U.S. Bureau of Labor Statistics estimates that there will be a 21 percent growth in programming jobs between 2018 and 2028. Software development is a well-paid discipline, with most people in this sector earning triple that of the average American worker – making it one of the best-paid industries to work in.

Let’s give a more detailed perspective of each one to help you make your decision.

Python is an easy-to-learn programming language that is high-level and project-oriented. It’s also a great option if you’re new to the programming field. Python’s extensive library of toolkits and standards makes it popular among coders, and it’s also easy to integrate with other programming languages. It can be used in a wide variety of contexts – from data science, game development, to artificial intelligence (AI) and machine learning. There are also a few social media sites that are built using Python-like Pinterest and Instagram.

Java is a loosely-coupled programming language that can operate on any supporting platform and is also known for being robust. It’s often used to build client-server applications, and it runs on about 3 billion devices around the world, making it one of the most used languages. In addition to being used in many business settings, Java is also used in the development of many Android operating systems.

JavaScript operates without needing to be compiled into machine learning instructions and is called an interpreted language. For people involved in web development, it’s a good option to use because it’s integrated with HyperText Markup Language (HTML). It’s also a popular choice of language for the development of browser-based apps that don’t need to be downloaded by users. JavaScript developer jobs here.

Most programming languages follow C syntax, which is why C is often referred to as the “mother language” of modern programming. C provides core concepts like arrays, strings, and functions. It can be used in a large variety of applications, including carrying out low and mid-level programming. Because it is so versatile, C can give users a large degree of control with minimal commands. C is commonly used for building computation platforms, games, and operating systems.

C++ is a general-purpose programming language and is a modified type of C. Because it supports different ways of programming, it is flexible, and that’s what makes it such a popular choice of language. It allows programmers to carry out procedural, functional, and object-oriented commands and is often found in web browsers, operating systems, micro-controllers, and video games.

The Benefits of Learning Programming Languages

There’s a lot of demand for people who can professionally use programming languages, and as such, programmers generally have a higher earning potential. The average programmer earns around $106,000, according to a Bureau of Labor Statistics (BLS) 2019 report. The high earning potential for programmers is further exemplified when compared to the average American annual salary of $39,810.

The digital economy is booming and growing – therefore, having programming skills can be a real advantage and can open doors to new career opportunities. Even if your job doesn’t require you to code or understand programming languages, having these skills can help you to interact better with those who do, and it can help you to better solve problems.

Many computer programmers can work remotely from anywhere in the world, and this enables them to work from home or to be digital nomads if they prefer traveling the globe while working. This provides a great deal of flexibility and means that the world is their oyster in terms of who they’re able to work for since they’re not tied to any fixed location.

Learning computer languages can help enhance your mathematical and logical reasoning skills, which can help you in complex decision-making scenarios in business or your personal life.

Are Insurances Effective in Covering the Damages Caused by Medical Malpractices?

The Rise Of Tech Companies In The Crypto And Blockchain Space

How To Become A Successful Crypto Trader In 7 Easy Steps?

Why Should You Consider Adding A Learning Management Software Platform For Your Workforce?