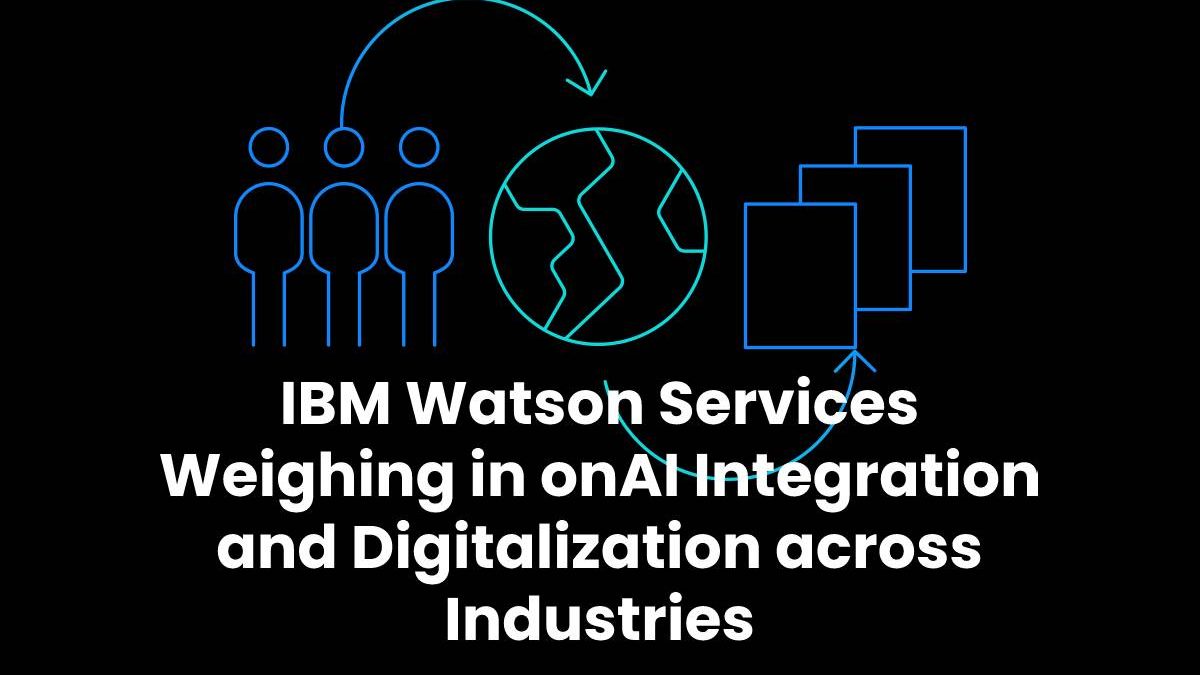 Technology across the globe is changing at a rapid pace.With the emergence of artificial intelligence and machine learning, a significant surge in the adoption of IBM Watson services has been witnessed.

As these software assist companiesin taking quick and informed decisions, their adoption is likely to soar in the coming years. The healthcare sector has emerged as one of the leading end users of IBM Watson services, where it is used in social program management, oncology, drug discovery, and automated care management among others.

Similarly, with increasing digitalization and use of cloud technologies, banking, financial services and insurance (BSFI) sectorwill exhibit scope for implementation of IBM Watson services. Owing to the growing complexity in the security landscape and rising number of cyber-attacks, the brand reputation of banks and customer data are under constant threat.

Thus new software have been developed such as Digital Wealth Advisor and IBM Watson’s Virtual Agent Solutionintended toassist the sector in securing their data.

The increasing trend of using integrated technologies in healthcare models to improvepatient care is anticipated to benefit the market growth. For instance, IBM Watson Genomics is being used in the TruSight Tumor 170 tools and Illumina to keep pace with recommendations of tailored drugs for cancer patients. Increasing applications are expected to create lucrative growth opportunities for the IBM Watson Services.

IBM Watson Genomics holds immense potential as it is capable of scanning a huge pool of patients in a brief time period and create a report based on the modification in genetic sequencing using Illumina’s tool.

These reports are highly important as they incorporate medical literature andclinical trials data related to relevant medications for an explicit recommendation, which assists the doctors in facilitating the diagnostic procedures for patients.

Supercomputers such as IBM Watson play a significant role in managing the staggering volume of data generated in healthcare institutions on a daily basis. It supports the industry in simplifying complex tasks such as analyzing patients’ structured & unstructured data, disease diagnosis, and aids in faster marketing of new drugs.

Key Development in IBM Watson Services to Keep an Eye On

IBM is capitalizing on Watson services to unfold potential opportunities in key areas such as security, analytics, the internet of things (IoT), and healthcare. IBM service providers are emphasizing on partnerships with local service providers rather than setting up their own branches for offering their service across the globe.

For instance, IBM announced collaboration with a France-based company named, Faurecia. Itsigned a memorandum of understanding (MoU) in January 2018, to recreate products and services for autonomous and connected vehicles.

A number of healthcare institutes are also establishing partnerships with IBM service providers. For instance, Barrow Neurological Institute partnered with IBM Health, where the IBM is used for ranking 1,500 proteins for its prediction-based integration with amyotrophic lateral sclerosis (ALS). Thus, an increase in number of collaborations and partnerships is estimated to boost the demand for IBM Watson services in the next few years.

Similarly, to address the increasing need for security due to the rise in number of cyber-attacks, IBM recently introduced its Watson’s special version named, ‘language of security’, designed to curb the incidences of cyber-attacks and provide a maximum level of security.

It is a cloud-based software impervious to cybercrime with the capability to predict and analyze potential threats, malicious, and suspicious activity in a computer system before it occurs. These ongoing developments in the industry are estimated to present remunerative opportunities for IBM Watson service providers by 2031.

Challenges in the IBM Watson ServicesIndustry

While the demand for IBM Watson services across the globe is projected to continuously rise over the foreseeable future, there are numerous challenges that players need to consider. For instance, the industry requires an expert to feed a structured and well-organized data into platforms for deriving insightful conclusions.

However, the lack of trained professionals for performing these function, especially in developing economies is posing a challenge for growth.Also, the inability of the IBM Watson services in making connections with different corpora will hold back growth opportunities. Lack of inaccuracy in the results due to the complexity of the software will remain a challenge for years to come.

Thanks to the ongoing developments in the industry and increasing application from the healthcare and BSFI sector, the global IBM Watson services market is estimated to have ample scope for navigating through unforeseen challenges.

Since the integration of artificial intelligence (AI) and hybrid cloud technologies is expected to rise in the coming years, IBM Watson services will continue enjoying the spotlight. In 2020 IBM announced launching innovative new capabilities for Watson services.

For instance, reading comprehension is based on an innovation question answering module from IBM research. This development is intended at helping to identify more precise answers for natural language questions.

With a slew of developments underway, coupled with proliferation of smart technologies worldwide, the demand for IBM Watson services is expected to grow at a stellar 30% compound annual growth rate between 2021 and 2031.

Kutubkhan Bohari is a professional writer in a leading market research firm, Fact.MR. He works closely with the research teams including healthcare, food & beverage, automotive, industrial automation, chemicals and materials, and other domains. His experience as a writer in a market intelligence firm has stirred his interest in research on historical and unexplored nuances of novel technologies.

Tips To Get Maximum Benefits Of Bitcoin Trading

What areas to look for earning 100k through crypto & bitcoin?

Guide Announcing The Launch Of The New Trading Website