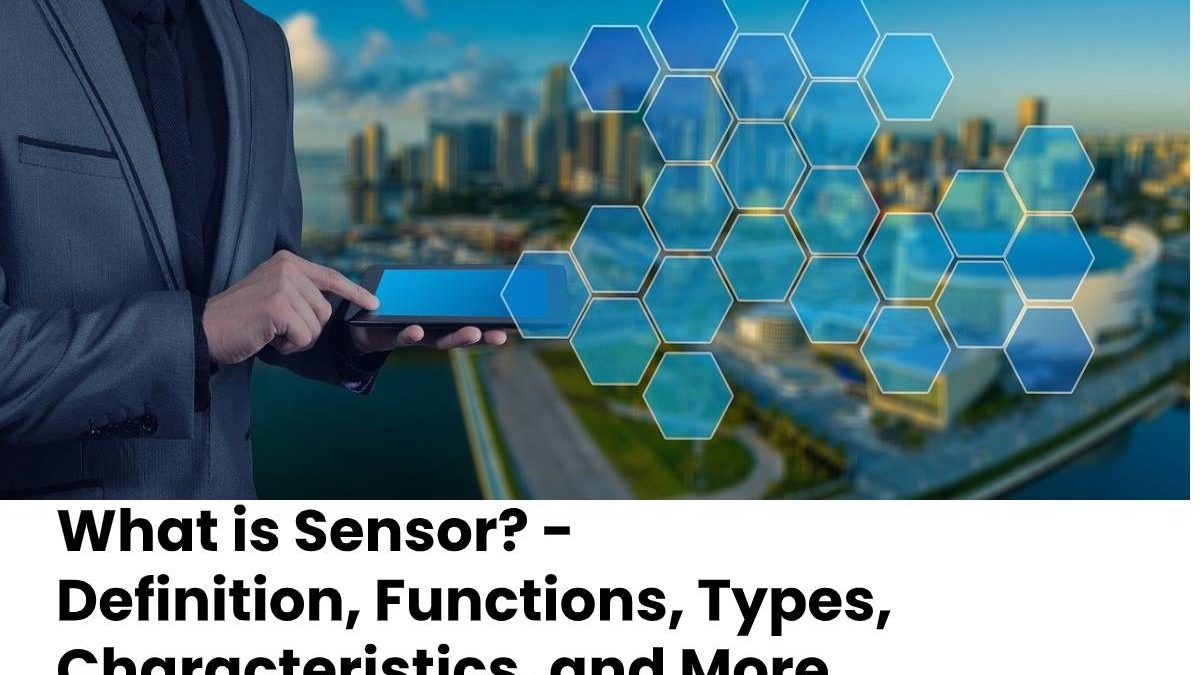 What is Sensor? – Definition, Functions, Types, Characteristics, and More

A sensor is a device, machine, or subsystem that detects events or changes in its setting and sends them in sequence to other electronics, often a computer processor. A sensor is always a part of electronics.

The term [sensor] refers to a measuring element that detects the magnitude of a physical parameter and changes it to a signal that can be processed by the system. The active component of a [sensor] is commonly known as a transducer. The design of [sensor]s and transducers always involves some physical or chemical law or principle that relates the amount of interest to a measurable event.

Monitoring and control systems require [sensor]s to measure physical quantities, such as:

Also read: What is a Browser? – Definition, Functions, Types and More

They generate signals of the magnitude to be measured but require an auxiliary intermediate source.

They are those that generate signals of the magnitude to be measured autonomously; that is, it does not require an auxiliary intermediate source.

The parameters to consider in any calibration and some terms used to define the operation and measurement systems as a whole.

Defines the limits between which the input of a transducer can vary.

It is the maximum value of the input minus the minimum amount.

It corresponds to the difference between the measurement result and the actual value. Failures are due to different causes, and they can be foreseen, calculated, eliminated through calibrations, and compensations.

Refers to which near the real value is the measured value; therefore, the accuracy is equal to the sum of all possible errors plus the error in the accuracy of the transducer calibration.

It is the dispersion of the set of values ​​obtained from repeated measurements corresponding to a magnitude.

The ratio indicates how much output gets obtained per input unit, that is, output/input. This term show sensitivity to other data in addition to the one measured, such as environmental factors. An example to identify is when adding the temperature variable; this means that our [sensor] or transducer will have a variation to the changes in the ambient temperature.

Corresponds to different outputs of the same measured quantity, and also this value changes according to either increase or decrease. The hysteresis error corresponds to the maximum difference obtained from increment and decrement values.

This error is the maximum deviation from the straight line.

Describes the ability of the transducer to produce the same output after applying the equal input value several times.

It is the ability to produce the same output when used to measure constant input over a period.

Corresponds to the intervals of input values ​​for which there is no output.

It is the minimum change of the input value capable of producing an observable change in the output.

When the sensor gets included in a circuit, we should consider its impedance, since the behavior of the system to which it is connected could get modified considerably.

Dynamic Characteristics of a Sensor

It refers to the behavior between the moment at which the input value changes and the time at which the value given by the transducer achieves its stable state value.

It is the time that elapses from when we apply a constant input, a step input until the transducer produces a response accordingly to the output corresponding to a specified percentage, such as 96% of the input value.

It is a measure of the inertia of the sensor, and it is considered the time it takes to react to changes in the input. The higher the time constant, the slower will be your reaction to a variable input signal.

The time required for the exit to reach a specified percentage of the output in a stable state.

The time it takes for the exit to reach a percentage of a given value.

There are different types of [sensor]s, depending on the type of variable to be measured. Some [sensor]s are for another purpose like distance [sensor]s could be used as a motion [sensor]s corresponding to “presence.”

It is advisable to know the variables that we want to measure, as well as the specifications of our sensors, for specific applications, we have to consider several factors.

Types of output required from the [sensor]:

They are some essential considerations for the selection of the sensor to be used, and it is crucial to make a list of the available variables, desired variables, and possible variables.

Also read: What is a Barcode? – Definition, Function, and Advantages

What is Digital Miner? Definition, Features and More

What is a Cybersecurity Specialist? – Definition, Tasks, and More

How to Motivate Staff and Increase Productivity

Tech Business 101: The Importance of An Inventory Management Software

PDF OCR tools for text recognition pdf files When a PDF is in text format, you may read the text…

How Audiobooks Can Help With Auditory Rehab?