Home > Definitions > What is Broadband? – Definition, Functions, Types, And More 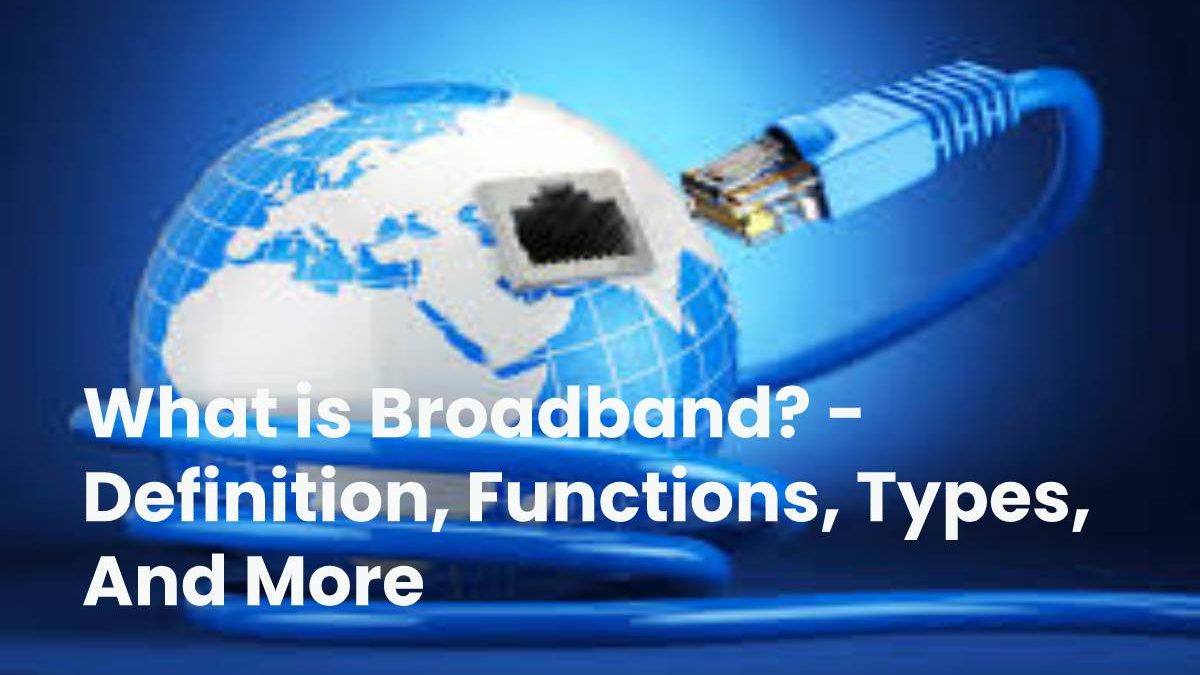 Broadband is the transmission of high-bandwidth data over a high-speed Internet connection. According to the FCC, the definition of broadband Internet is a minimum of 25 Mbps download and 3 Mbps upload speeds. Broadband provides high-speed Internet access through multiple types of technologies, including fiber optics, the mobile service, the connection service by cable, by DSL, and by satellite.

Broadband generally refers to an Internet service that runs on a wired connection but is also available as DSL or Fiber. The dawn of the Internet age has brought about various changes for the human race and civilization. Messaging and communication have never been so secure and convenient as now. All this invention of the Internet and success is due to the development of broadband technology. Broadband got first introduced in the early 2000s. It

helps Internet users with the opportunity to browse and use the Internet while making a phone call. It divided the signal transmission between Internet data and telephone data, which is considered one of the main improvements of the traditional telephone connection. Broadband now consists of various devices or computers that form an almost infinite system of data exchange.

This innovation has also brought with it greater convenience in downloading files, movies, and songs, among other things. Online streaming platforms were not possible at a connection speed of 56kbps. During its initial launch, it would be costly to have broadband services because of which it was not commercially accessible and sought after in its early stages. The companies were consistent in improving services compared to those of their competitors; this resulted in the development of fast broadband packages. Today, everyone at one point in their life has used the broadband connection.

Broadband connections are much faster and more efficient than the old telephone connection. Most Internet service providers take several factors into account when offering broadband services. The fact that users live in an urban or rural area is essential, as ISPs take the user’s location into account. Subscriber rates changes depending on the broadband package.

Some high-speed broadband connections that are available today

This type of broadband connection uses ordinary telephone lines to offer high-speed Internet. A telephone company enables the line with a set frequency that will then send and receive Internet traffic. DSL is a subscription-based service that also requires a physical modem.

Below are the two types of DSL transmission technologies:

This type of DSL transmission has a connection to a telephone line. Composed of a pair of copper wires, it carries both voice signals and Internet data to the other end of the telephone connection, but with different frequencies. These signals are affected by any interruption in the copper cable.

Most companies prefer this type as they require constant video conferencing. This service requires a high level of bandwidth for both upload and download.

It is similar to the DSL modem, but instead of telephone lines, the Internet signal gets connected through a coaxial cable, and the ISP is a cable television company. These modems are faster than DSLs, even if there are many connected through them. However, the number of users can affect the total speed of the connection. Rates depend on the package and the company you are going to buy.

Satellite television providers offer satellite broadband. It is now available at a lower price. It is an option for people who live in rural areas where they have no cable or fiber connection. Satellite is like a  wireless connection that uses a modem to function. In terms of speed, it is the same as a wired connection.

It is a high-speed connection that is limited to a short distance. Devices that get integrated with WiFi receivers can obtain signals up to 75 feet from the router. Most companies offer their customers free connections or public Internet access areas. Although it is free and efficient, it is not secure, and data can get easily intercepted from one wireless access point to another.

Many companies offer high-speed access to their consumers by selling small modems over a wireless cellular network. Unlike open or shared WiFi, this type is only available for a single connection even if there is no WiFi signal, as long as there is cellular service. Most smartphones now also can “tie” cellular data to other devices via an access point as well.

It is the transfer of complete or partial data using light signals through fiber, a thin glass wire inside a large protection cable. Since it is the latest addition to DSL, its service areas remain limited. If fully developed, it would be the fastest of all types.

What is Content Management System? - Definition, Advantages, And More

Secure Your Place with the Help of Battery Operated Security Camera

What is a .CC domain? – Definition, Uses, Features and More