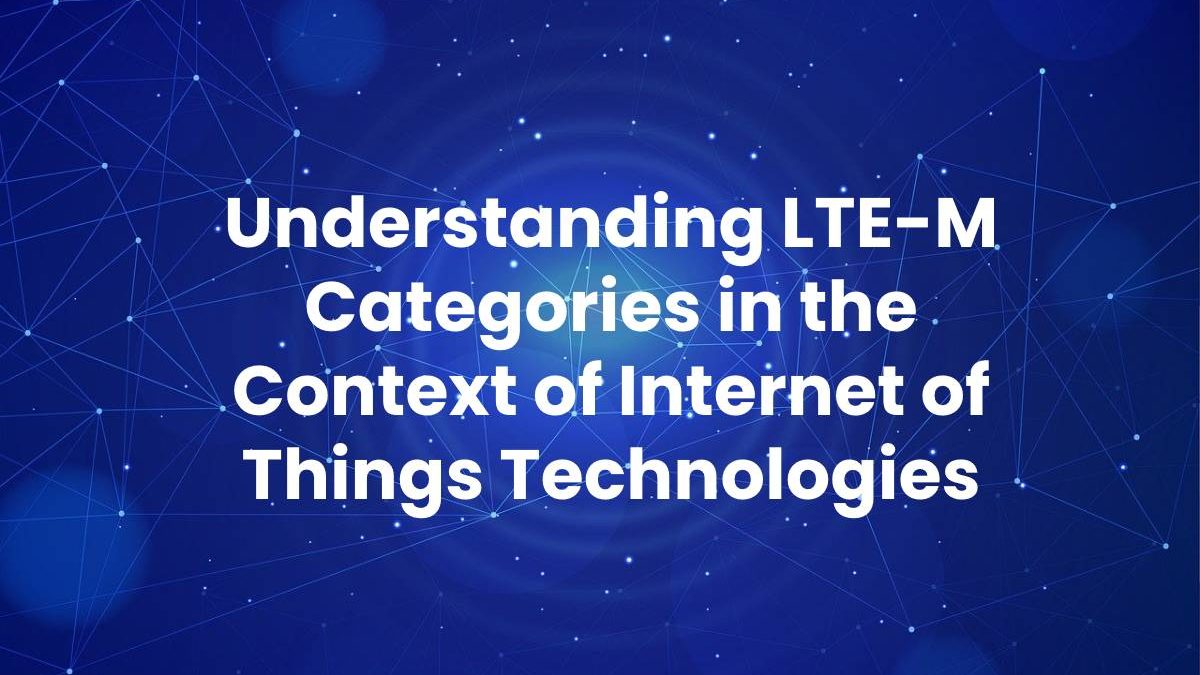 Understanding LTE-M Categories in the Context of IOT Technologies

Chances are you are already accustomed to LTE Technology (Long Term Evolution) which is a mobile communication standard that allows for the transfer of data over the air in larger amounts and at higher speeds than was previously possible. However, LTE Technology extends much further than mobile technology only. Today, the technology is being applied in the Internet of Things (IoT) Industry. In this article, we will look at concepts such as LTE-M and LTE IoT standards and how these technologies are poised to change the technology industry.

LTE-M is the industry abbreviation for the LTE (Long Term Evolution, or simply 4G) Category M1, a leading low-power wide-area network (LPWAN) technology used for Internet of Things (IoT) applications. LTE-M is used for interconnecting objects such as IoT sensors and actuators. The technology has also found application in connecting machine-to-machine (M2M) devices, which has given it an edge when building smart cities or smart street lighting.

The LTE-M Technology has also been set apart from its previous generation competitors due to functionalities such as:

IoT Standards that Fall Under LTE

LTE-M is designed for low power consumption and IoT devices with low bandwidth needs. The LTE-M standard was published in 2016 by 3GPP. The technology is able to connect resource-constrained devices to the internet by allowing for the transmission of small amounts of data over long periods of time. This also allows it to provide high signal penetration and retain minimal power consumption.

Some of the areas where LTE-M is applied include smart cities, smart meters, smart street lighting, personal IoT devices, asset tracking, and the automotive and logistic industry.

Today, companies, organizations and local governments looking to purchase LTE-M modems can access them online in companies such as Eclipse, where you can be guided on which LTE-M modems are appropriate for you, how to install them and the benefits of having such devices.

NB-IoT is also an LPWAN technology that operates on the licensed spectrum. The technology is designed for IoT devices with low bandwidth needs.

LTE Cat.1 standard was introduced in 2008, becoming the first Internet of Things (IoT) specific variant of LTE technology. Today, Cat.1 is still in use, and in some parts of the world, it is the only solution that can meet the needs of cellular communication and IoT. The technology has the ability to reach 10 Mbps for download and 5 Msbps for upload.

Cat.4 modems can hit speeds of 150 Mbps, more than ten times their Cat.1 counterparts. The devices are also more expensive than the rest of the devices discussed above and are mostly reserved for handheld devices.

In Cat.4 category, one of the leading devices in the industry, LTE Cat.4 Modem ECL-EC25-T6 is able to offer services such as smart metering and smart lighting. Other applications of Cat.4 LTE standard include video surveillance, ANPR, asset tracking and environmental monitoring.

10 Business Operations Every Company Will Need to Automate

How Push Notifications can help to Boost Mobile App Engagement?

Big Data Analytics: How It Works and Its Benefits

How to use virtual phone number to create unlimited online accounts