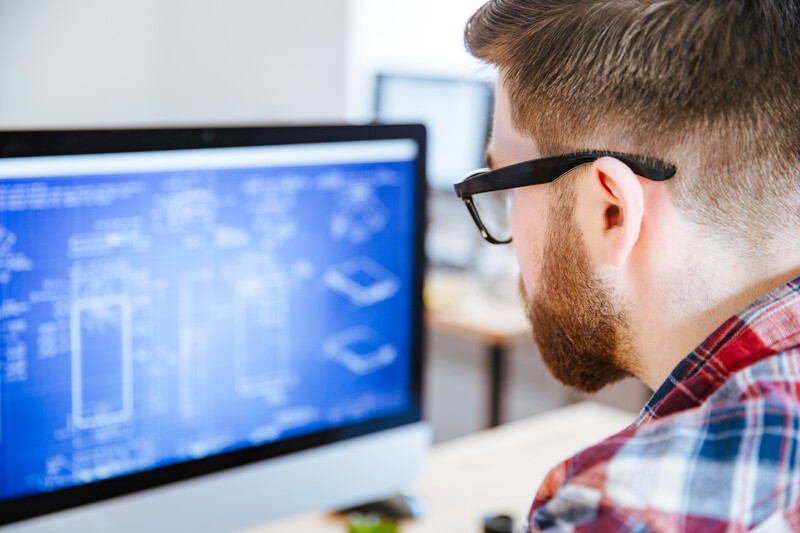 There’s no question about it – gadgets these days are a necessity. Unfortunately, for many, they can be quite an addiction or a means to a good end, such as completing a job or project. With millions of people working in front of a computer screen, watching TV, and using their smartphones, it is no wonder that certain health issues are raised. One of these issues is the prolonged exposure to blue light. Blue Optical examines the problems with blue light and eyeglass solutions that constantly plague eyeglass wearers and takes a look at the best solutions to combat this problem.

What is Blue Light and Why Is It a Cause for Concern?

Blue light occurs naturally because it is part of the light spectrum that is visible to the naked eye. However, it is also generated by devices such as computer screens, televisions, game consoles, tablets, and smartphones. With so many people using gadgets with screens and spending hours upon hours in front of a computer, it is no surprise that blue light exposure is a rising problem not just among adults but also among teens and young children.

Blue light also has benefits. It helps improve memory and mood, and boosts alertness and cognitive function. It also helps with the body’s circadian rhythm and the development of vision among children. Unfortunately, these benefits can only be enjoyed with natural sunlight and not always with artificial light.

Because of its shorter wavelength and high energy, blue light can easily scatter, causing unfocused visual images that do not have the ideal contrast for the eyes to focus on. This explains why working in front of a computer screen, playing games, or watching TV can cause eye discomfort. This discomfort can also be followed by other issues, including blurry vision, headaches, and pain in the neck and shoulders.

Studies show that people who read or watch videos using a digital device such as a TV, computer, or smartphone blink less than they normally would. Blinking is a way for the eyes to remain lubricated. When people blink less, the eyes become dry, itchy, and irritated. In some cases, they may even experience blurred vision.

The human eye does not have the capability of blocking light, including blue light. When exposed to blue light, the eye simply allows it to pass through the cornea and the lens to reach the retina. Continued exposure to blue light could cause damage to the retinal cells which in turn could lead to vision problems, including macular degeneration – a condition that affects older individuals.

Blue light could increase the risk of the development of certain types of cancers. In one study, for example, people who worked night shifts were found to be at higher risk for prostate, breast, and colorectal cancers.

Younger children do not have the same physical capabilities as adults. Children, for example, have even lower capacity in filtering blue light compared to adults. Kids who are constantly exposed to blue light at night may have increased risk of developing health issues such as myopia (nearsightedness), obesity, and attention focusing problems.

Protecting Yourself from Harmful Blue Light

Although limiting your time in using gadgets emitting blue light is one of the best ways to protect yourself from the effects of blue light, it may not always be the best option. This is especially true for individuals for whom spending time in front of a computer screen is necessary, such as for work, learning, or professional gaming. To prevent further damage, using tools that filter blue light is recommended. Glasses that are equipped with blue light filter are the best solution for this problem.

Blue light glasses are crafted to prevent or block blue light emitted by digital screens. The special lenses are made by mixing the plastic lens material with another material that disperses blue light. This prevents direct and constant exposure to harmful light in this spectrum. Some lenses may also be equipped with a UV-blocking material or pigment to provide even more protection against harmful rays. As a result, the eyes do not become strained as easily and any harmful effects are avoided.

As effective as they are, blue light glasses are not bulletproof, so to speak. the eyes still have to focus on the screen for hours at a time. To maximize the efficacy of blue light glasses, consider practicing good computer/smartphone habits, such as:

Practicing the 20/20 rule – resting the eyes for 20 seconds every 20 minutes of screen time. This could consist of looking away at another object or just closing your eyes.

Limiting gadget use. Sometimes, staring at the screen is merely a force of habit and not exactly a necessity. If looking at a computer screen, TV, or smartphone is not exactly important, try to do something else.

Use the phone night mode. In some phones, such as the iPhone, the setting is known as “night shift” and it can be set to certain hours in the night or early morning. For example, you could set your phone on this mode setting starting at 9 p.m. until 6 a.m. During this period, the phone will change its display colors to warm, so there is less exposure to blue light for the user.

How to Recover From a Hard Drive Clicking Sound

Pros And Cons Of Applying Robots In Assembly Automation

Transformation of Gaming with VR