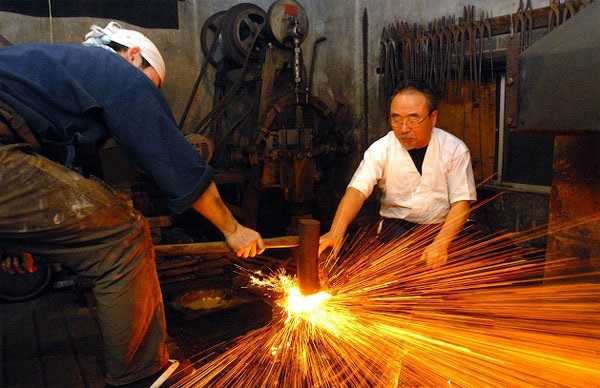 The foremost weapon of the Samurai was the Japanese sword, or Katana. The history of Japan has produced several artifacts, including weapons. This is especially true of feudal Japan, with its beginnings in the Kamakura Period (1185 – 1333) up to the Edo Period (1603 – 1868). This was a time of feudal lords, or Daimyo, competing for power under a larger governmental system (called the Bafuku), run by a generalissimo-type figure called the Shogun. The Shogun deferred to the Emperor, whose family was believed to be descended from Shinto deities. It had a long, curved blade, mixed composition, single edge and gently pointed tip. But What Kind Of Steel Are Japanese Samurai Katana Swords Made Of https://www.samuraiswordsmith.com/

The Emperor had little more than symbolic power, however, and most of Japan’s feudal history was about competition for land, with Daimyos occasionally overthrowing the Shogun. A warrior class called the Bushi, or Samurai, gained prominence during this period. They were defined by their distinguishing armor, ethics, and weapons. 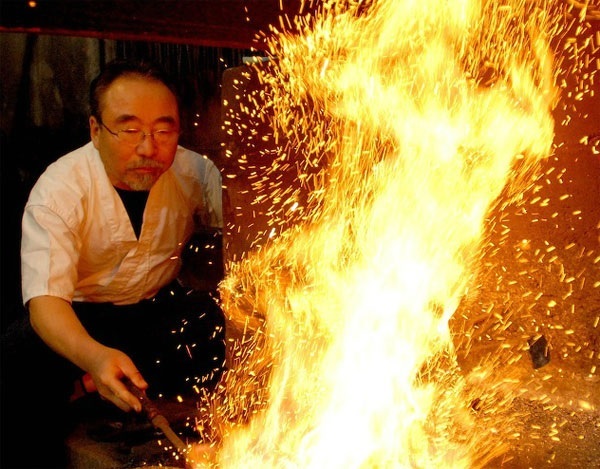 Japanese swords — Katana — are traditionally made out of a type of steel called Tamahagane. In Japanese, tama means “precious” or “round”, as said of a gemstone, and hagane means “steel”.

Tamahagane is made of a mix of iron sand (iron ore) and charcoal. The iron sand is the main component of Tamahagane and is reduced to steel in a prolonged refining process. The charcoal provides a small, but materially significant amount of carbon to the Tamahagane and determines the sharpness or hardness of the finished steel.

There are two types of iron sand used to make Tamahagane. These iron sands are called Akome Satetsu and Masa Satetsu. Akome Satetsu is considered a low-quality iron sand, derived from an igneous rock called diorite. Masa Satetsu is considered a higher-quality iron sand, derived from granite. The furnace worker, or Murage, determines the amount of each sand to be put into the refining furnace, called the Tatara.

The Tatara is a large clay furnace that stands four feet tall, twelve feet long, and four feet wide. Using charcoal and a system of bellows, the Tatara is heated to temperatures ranging from 1800 to 2500 degrees Fahrenheit. At this point, the iron sands and more charcoal are added.

The iron sand-charcoal mixture is refined over a period of 36 to 72 hours. Every ten minutes, more iron sand is added to the mixture. The mixture never reaches its melting point, rather, it is malleable and is turned over several times. After this period, the Tatara is broken open.

The resulting raw steel lump, or bloom, is called the Kera. The refining processes can take 13 tons of iron sand and 13 tons of charcoal and make 2.8 tons of Kera, out of which only about one ton of Tamahagane is usable. For these reasons, Tamahagane is a very expensive steel — costing up to 50 times the worth of steel produced in modern factories. 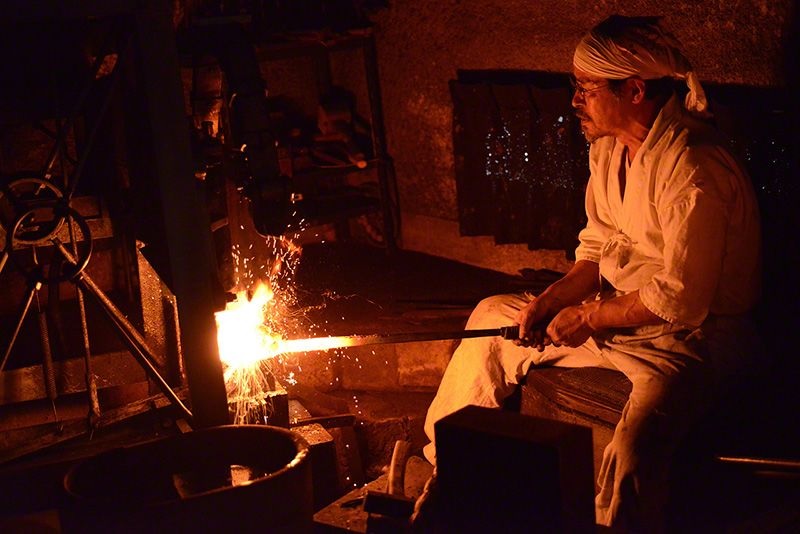 The outer layers of the Kera are subject to higher rates of oxidation. This means that the best Tamahagane is derived from these layers. However, a Katana is a sword that consists of a composite steel material. During the smelting process, the added charcoal gives the mixture a degree of carbon that ranges from 0.5 to 1.5 percent.

Higher-carbon steel gives the outer Katana blade hardness and a sharp edge. Lower-carbon steel, which forms the core of the Katana, is slightly softer, but highly durable. This allows for the sword to absorb shock and not be too brittle. The wave-like formation in completed swords is called the Hamon. The Hamon is largely ornamental today, but was originally the boundary between high and low-carbon steel.

A sword smith, or Tosho, removes the slag, or impure elements, from the Tamahagane. This is done by heating and repeatedly hammering it over an anvil. During this process, the Tamahagane is folded numerous times and the slag is slowly but surely drawn out.

By this repeated hammering, the Tosho can determine which parts of the Tamahagane are high-carbon and which parts are low-carbon. This will help to forge the blade.

The Tosho shapes the high-carbon Tamahagane into a long, narrow shaft with a U-shape. This is going to be the hard, sharp, cutting edge of the Katana Sword. The low-carbon Tamahagane is formed into a solid, durable core that will rest inside the blade component. The two pieces are fit together and forged in fire, shaped accordingly by the Tosho.

After the main forging is complete, a heavy coat of clay and charcoal powder are applied to the sword’s back edge. A lighter portion of this mixture is applied to the actual blade. This mixture will protect the blade and will produce the wave-like Hamon. The sword is then fired a final time at a temperature below 1500 degrees Fahrenheit, to prevent the materials from cracking.

The next step involves dousing the fired blade into water in a process called “quenching”. Quenching causes the high and low-carbon Tamahagane to contract at different rates, causing the blade to bend into the distinctive Katana form. Up to one in three blades can be lost during this step, making it a very risky process.

The blade is taken to a sword polisher, who uses a combination of water and polishing stones to wear down the clay coating and take further impurities out of the Tamahagane. This process can take up to two weeks.

The blade is then fitted with a decorated iron hilt and an equally decorated wooden scabbard. Such decorations are viewed as important as the Tamahagane blade.

With the hilt attached and the scabbard in place, the blade is now a completed Katana. Start to end, its construction was a six-month process involving as many as fifteen workers. The finished Katana owes its life to Tamahagane steel, making a durably constructed weapon into a beautiful work of art.

Review But What Kind Of Steel Are Japanese Samurai Katana Swords Made Of. Cancel reply

3 Benefits of a Dry Herb Vaporizer