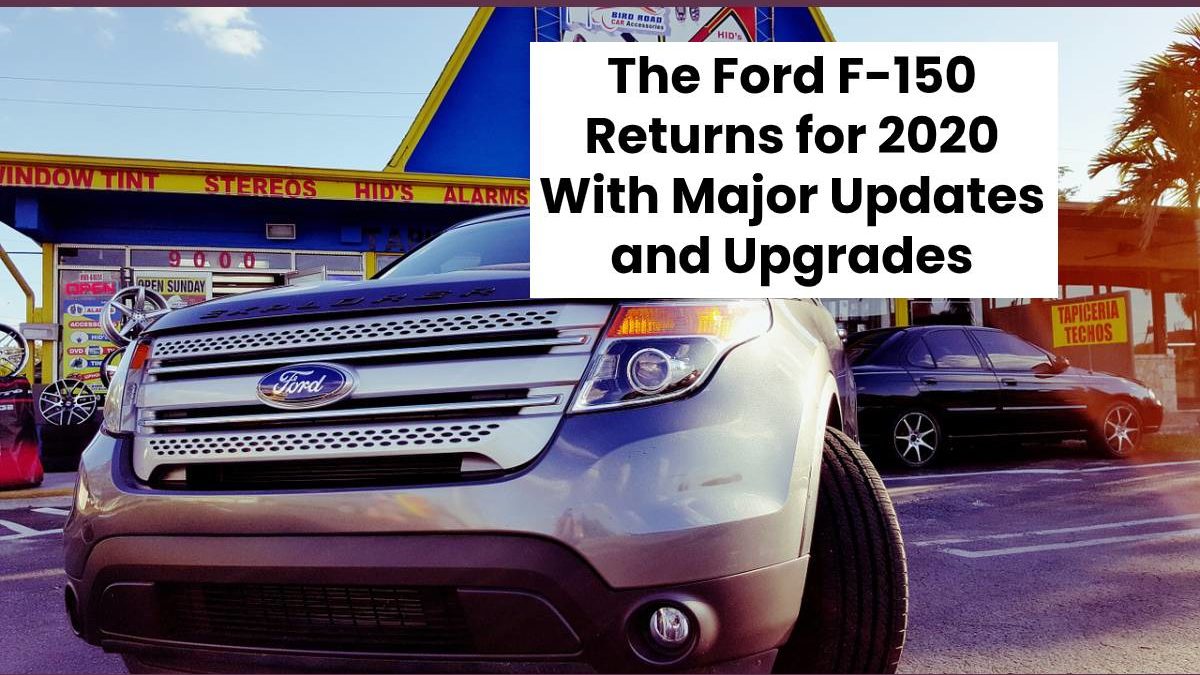 The Ford F-150 has consistently been the best selling truck in America flipping the bird to most other manufacturers even though manufacturers like Dodge arguably have a more rounded offering in the form of the RAM 1500. The Ford F-150, therefore, possesses a cult following and definitely deserves it too as it is an extremely capable truck that has been serving generations. Ford recently featured a demonstration where a lineup of train carts was pulled by the upcoming Electric F-150 which contained 42 Gas Powered Ford F-150’s that was a mark to commemorate every year it had been the best selling truck in America. This then just shows that the F-150 sells, and it sells hard. The electric iteration of the F-150 might be a little too distant for many to wait and for all of you out there; Ford has 2020 F-150 up for sale.

There aren’t any mechanical or cosmetic differences between the 2019 and 2020 Ford F-150 that would see us give any major thumbs to Ford but there is a revised equipment list. Unlike some vehicles that have undergone extensive revisions for 2020 to keep them relevant, the Ford F-150 continues to dominate the market with virtually no changes. For the 2020 Model Year, the biggest change comes in the form of Ford making its suite of safety features -the Ford Co-Pilot 360 standard on certain trims that featured it as an optional extra earlier. The seven trim levels are still the same as they were in 2019, and the consumer has to choose between the XL, XLT, Lariat, King Ranch, Raptor, Platinum, and Limited to try and somewhat narrow down what all they require in their personal F-150.

For 2020 MY, Ford has decided to make the Ford Co-Pilot 360 safety suite a standard addition to the Lariat, King Ranch, Platinum and Limited trims which means that even the kind-of base model (The XL and XLT are just work truck trims) now comes in standard with the coveted Ford Co-Pilot 360 that houses a long list of active safety features in the form of Blind Spot Information System with Cross-Traffic Alert, Lane-Keeping System, Pre-Collision Assist with Automatic Emergency Braking, Auto-High Beam Headlamps and a rearview camera with Dynamic Hitch Assist. The Platinum and Limited models also get even more goodies as standard since they also feature Adaptive Cruise Control with Stop-and-Go and the voice-activated touch screen navigation system. This standard kit reshuffling is the primary result of a more safety-focused approach as the Blue Oval does want to make the safety tech even more accessible for the 2020 buyer. Up until the 2019 Model Year, consumers had to opt for a technology package upgrade that would get them the Ford Co-Pilot 360 suite over the MSRP of the vehicle that did mean that many of the 2019 Ford F-150’s left the showroom floors being unequipped with the Co-Pilot 360 Suite.

Due to the 360 Suite being standard now, Ford has had to bump up the prices on the affected models by a relatively reasonable amount as the Lariat now comes in $800 dearer than before while the other trims such as the King Ranch, Platinum and Limited get a price increase between $300 and $350 which isn’t a deal-breaker by any stretch of the imagination but still noteworthy. To make this increase come off as even more sensible, we have to realize that up until 2019 if one was to add the Co-Pilot 360 system to their desired truck configuration, the consumer had to shell out $1,195 for the Technology Package on top of a rather cost inhibiting package dubbed the 502A Equipment Group that cost almost $7050 and was a requirement that one would need to also opt-out the Technology Package. Yes, the 502 A Equipment Group did bring in many expensive features to the table in the form of leather upholstery, heated steering, heated rear seats, and the chrome package being the most notable, but it also meant that many people had to miss out on the Ford Co-Pilot 360 for their 2019 trucks as adding over $8000 to the base price is not feasible for every client, no matter how much they just wanted the Co-Pilot 360 system. The 2020 Ford F-150 Raptor also gets a subtle equipment change as well since the Raptor Technology Package has been given the ax and the premium assistance features such as adaptive cruise control, a lane-keeping system, and rain-sensing wipers are now a part of the Mid (801A) or Luxury (802A) packages.

The Base XL variants can be shod in an STX Appearance Package while XLT and Lariat variants can be equipped with a Black Appearance Package if you check a box on the options list. The lineup also is offered in three new colors which are – Iconic Silver, Rapid Red Tinted ClearCoat, and Star White Metallic Tri-Coat, and more or less conclude the extent of changes to 2020 MY of the F-150. The 2019 model of the F-150 might appear to be a little lucrative to many but under all practical circumstances, the predictable savings of going with the older model are heavily outweighed by the value brought in by the 2020 MY as the newer truck even though has a slightly higher base price than the previous iteration, manages to shave off the cost of an optional extra that many might not have desired but would have been forced to tick if they wanted to get the C-Pilot 360 system which would make the actual cost of buying either similarly equipped trucks identical.

How many pounds can a Ford F-150 tow? 2020 ford f 150 towing capacity is good and capable of comfortably hauling all your everyday cargo. The other more torquey engines further enhance the towing capabilities of this F-150.

It is no secret that the 2020 F-150 doesn’t have “a huge set of upgrades or features” when pitched against the 2019 MY and arguably a lighter refresh than this wouldn’t have been possible. The 2020 MY might see the F-150 feel a little bit dated for some, these people should definitely wait for the upcoming 2021 F-150 that is supposed to have some substantial upgrades in the pipeline. For the ones that couldn’t care less about what the future holds for the F-150 lineage, the current F-150 is all the truck that you could ever need!

Review The Ford F-150 Returns for 2020 With Major Updates and Upgrades. Cancel reply

10 Expert Tips for Building an Online Store That Sells

Put Your Safety First in an SUV: 13 Tips for Drivers

Buying the best second hand bikes from the dealers